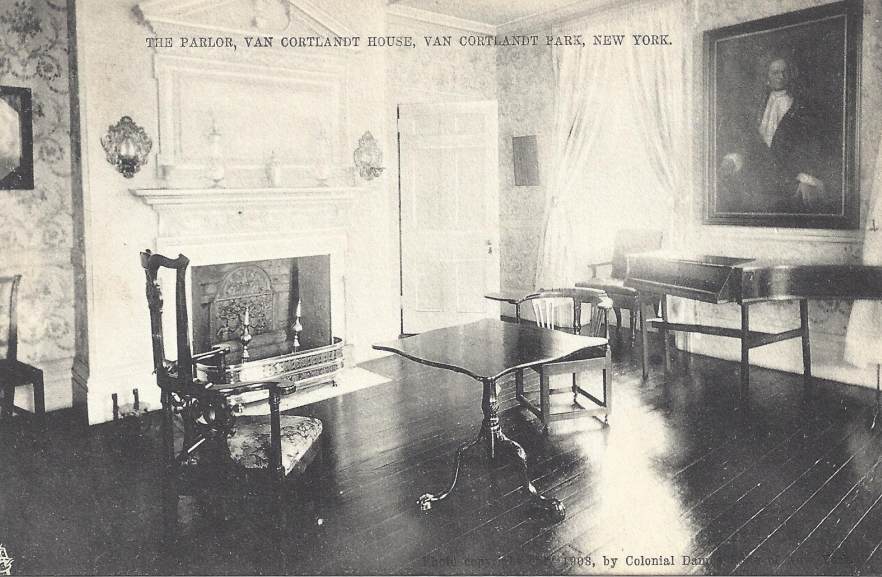 If you are an avid reader of this blog, then you know that yesterday, July 2, holds as much claim -- if not more -- to be America's birthday as tomorrow, July 4. And, in fact, since New York City didn't vote to ratify the Declaration of Independence until July 9, maybe the holiday should actually be a week long.

So, welcome to Independence Week.

Today's postcard is from ca. 1908, and shows a black-and-white view of the parlor in the Van Cortlandt House Museum in the Bronx. As we write in Footprints in New York about our visit to the house:

Soon, I discover that the Dutch woman and I won’t have the place to ourselves. A costumed interpreter—I’ll call his garb late-Colonial/early-Revolution—is leading a group of two-dozen fourth graders down the house’s main staircase.

Tremendous care has gone into furnishing this home, from the seventeenth-century Dutch room on the second floor to the “best” bed- chamber used by George Washington on his visits to the house. That room features a beautiful mahogany dressing table and an English chest of drawers from 1725, both of which descend from family members. They’ve draped a blue coat and a tri-cornered hat on one chair, as if General Washington has just stepped out for a moment.

The Van Cortlandt house is open for visitors every day but Mondays. More details can be found at http://www.nscdny.org/headquarters-dumbarton/van-cortland/.

* * * *
Read more about the Van Cortlandt House and 18th-century New York in
Footprints in New York: Tracing the Lives of Four Centuries of New Yorkers

If you haven't had a chance to pick up a copy of Footprints yet,
you can order it from independent bookstores across the country.

Posted by Michelle and James Nevius at 10:56 AM