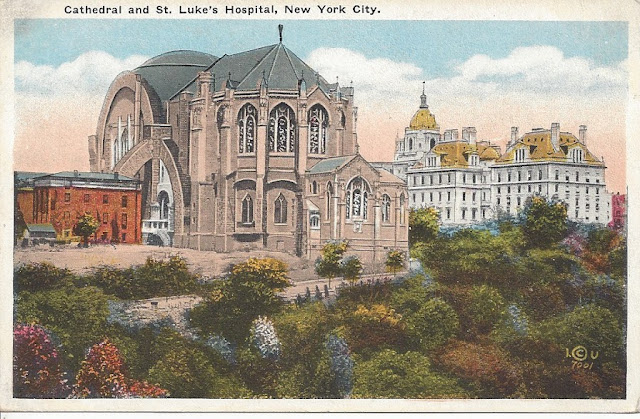 On November 30, 1941—76 years ago today—a celebration kicked off at the Cathedral of St. John the Divine in Morningside Heights to mark the completion of its massive nave.

The cornerstone for the cathedral was laid on December 27, 1892—the feast of St. John the Divine—but work proceeded slowly. The sheer size of the project was daunting, and despite the rocky nature of the heights, it took workers a full two years—and 72 feet—before hitting solid bedrock. Once construction began, the architects’ grandiose plans were difficult to execute, in particular...[the] apse, which called for the world’s largest granite columns.

In 1907, before even the apse and choir were finished, [chief architect] George Heins died, which freed the cathedral from their contract with [his] firm. Once the apse was completed in 1911, the cathedral...hired Gothic aficionado Ralph Adams Cram to finish the church. Cram promised he could build the church faster and bigger.... Cram’s work began at the crossing in 1916 and over the next twenty-five years his team completed the massive nave. On November 30, 1941, the church kicked off an eight-day festival to celebrate the nave’s completion. On the final day of the festivities, December 7, the Japanese bombed Pearl Harbor and, for all intents, work on the cathedral stopped.

Though some additional construction work on the cathedral has taken place in the intervening decades, most of the development on cathedral property today involves apartment buildings.

Posted by Michelle and James Nevius at 12:55 PM No comments: 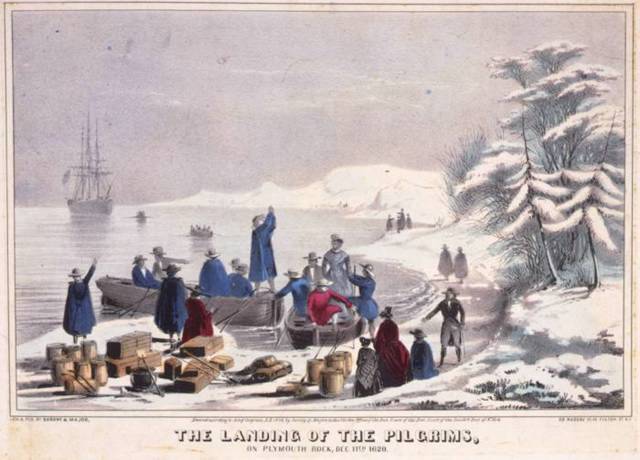 Last year, James wrote a brief history of Thanksgiving for the Guardian US. Our national holiday has less to do with the Pilgrims (shown above landing on Plymouth Rock in December 1620) and more with northern abolitionism and a writer named Sarah Josepha Hale, who launched the celebration we know it today.

Not everyone was on board. As James writes in the piece, one critic complained that "Thanksgiving was an attempt to replace the 'legitimate Christian holiday' of Christmas with a secular day where 'an astonishing quantity of execrable liquor will be guzzled.'"

Here's hoping that you guzzle an astonishing quantity of the beverage of your choice today while remembering Hale's call for this to be a charitable day of “benevolence of action” and that “every American home” should be a “place of plenty and of rejoicing."

Read the full story at The Guardian's website and feel free to share with your friends and family.

Happy Thanksgiving!
Posted by Michelle and James Nevius at 11:12 AM No comments: 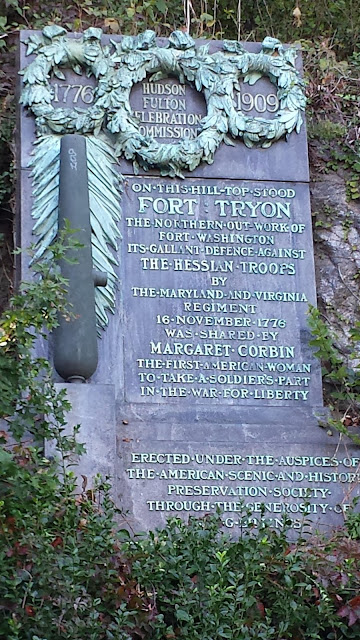 Should you find yourself in Washington Heights, stop by Fort Tryon Park (home to the Cloisters); today marks the 241st anniversary of the battle of Fort Washington, where 3,000 Hessian troops and 5,000 British regulars overwhelmed the American troops.

In the fall of 1776, the Americans were on the run. They'd abandoned Lower Manhattan in September and despite a minor American victory in Harlem Heights on September 16, George Washington's troops were then routed at White Plains on October 28. In the wake of that loss, Washington ordered General Nathanael Greene to abandon Fort Washington in Upper Manhattan and head to New Jersey. However, Greene and the post's commanding officer, Colonel Robert Magaw, convinced Washington that the fort was defensible. That turned out to be a grave miscalculation, in part because one of Magaw's soldiers, William Demont, turned out to be a traitor, and had already given the British details of the fort's defenses.

By the end of the battle, 59 Americans had been killed and nearly 3,000 taken as prisoners of war. Many of these prisoners would subsequently die in the fetid conditions of British prison ships in Wallabout Bay, Brooklyn.

One American killed was John Corbin. His wife Margaret, a nurse who been allowed to join the soldiers in the fort, took his place at his cannon and continued firing until she was gravely injured. She never fully recovered from the wounds she received that day and later became the first woman to receive a military pension.

Posted by Michelle and James Nevius at 11:45 AM No comments: 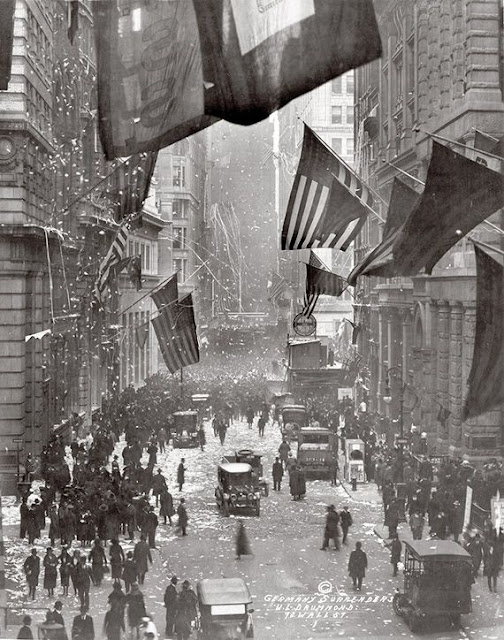 This Saturday marks the 99th anniversary of the end of World War I. In 1919, America created a new holiday, Armistice Day, to mark the fact that the peace treaty was signed on November 11, 1918. In 1954, that holiday became Veterans Day, honoring all those who have served in the armed forces.

The photo above shows Wall Street in 1918 celebrating the end of the war with a spontaneous barrage of ticker-tape.

After the war, Avenue A on the Upper East Side was named York Avenue after one of the heroes of the war, Sgt. Alvin C. York. Below is the text from one of our most popular posts (slightly modified) about York and his eponymous street. 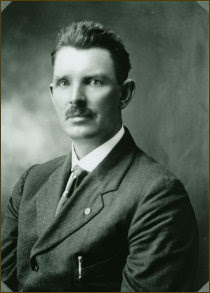 However, York Avenue is actually a much more recent appellation: it was named in 1928 to honor Sergeant Alvin C. York, America’s most renowned World War I hero. Alvin York (1887-1964) was drafted in 1917. Though a conscientious objector (his application for CO status was denied), York became a hero during the Battle of the Argonne Forest. In an improbable feat of courage, York found himself in charge of his unit after many of his compatriots were killed and he managed to kill over 20 Germans soldiers and capture 132 more.

York was awarded the Medal of Honor and upon his return to the United States was feted in New York with a ticker tape parade. York regularly stayed in the news over the next decade, both for his efforts to help the rural poor of Tennessee (his home state) by building a school as well as for his aversion to accepting charity. When offered a free honeymoon, he turned it down stating it would just be a “vainglorious call of the world and the devil.”

This idea of renaming a street after a war hero to bolster its real estate values was not new. Anthony and Orange streets—two of the worst streets leading into the old Five Points neighborhood—were renamed Worth and Baxter in the early 1850s after two of New York’s two great heroes from the Mexican-American War, General William Jenkins Worth and Colonel Charles Baxter.

Posted by Michelle and James Nevius at 12:42 PM No comments: 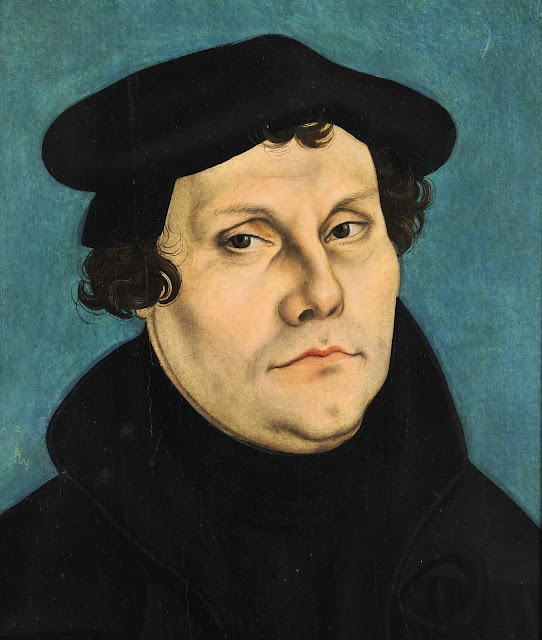 In the midst of Halloween and the terrorist attack in Lower Manhattan, it may have slipped by that October 31 was also the 500th anniversary of the Reformation, perhaps the most important moment in western culture in the last millennium.

James wrote a travel story for The New York Post about visiting sites in Germany associated with Luther and his circle. You can read it at: http://nypost.com/2017/10/30/tour-the-germany-of-luthers-reformation-500-years-later/

(James was also interviewed for this story about haunted New York, also in the Post: http://nypost.com/2017/10/28/nycs-most-haunted-spots-will-terrify-you/) 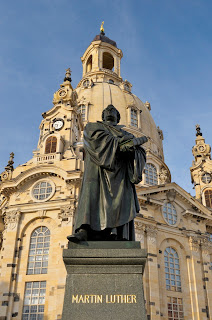 Posted by Michelle and James Nevius at 2:48 PM No comments: