Yesterday was the 104th anniversary of the Triangle Shirtwaist Factory fire, one of New York's greatest tragedies. We've dug up some interesting images from the Library of Congress: above, this photo evidently shows a horse-drawn fire engine racing to the scene of the fire. Below is a crowd of union supporters marching on May 1, 1911 (which is still Labor Day in most of the world, just not the USA). On one of the Yiddish signs is the number 146 -- the number of victims of the fire.

Below is our post about the fire from last year: 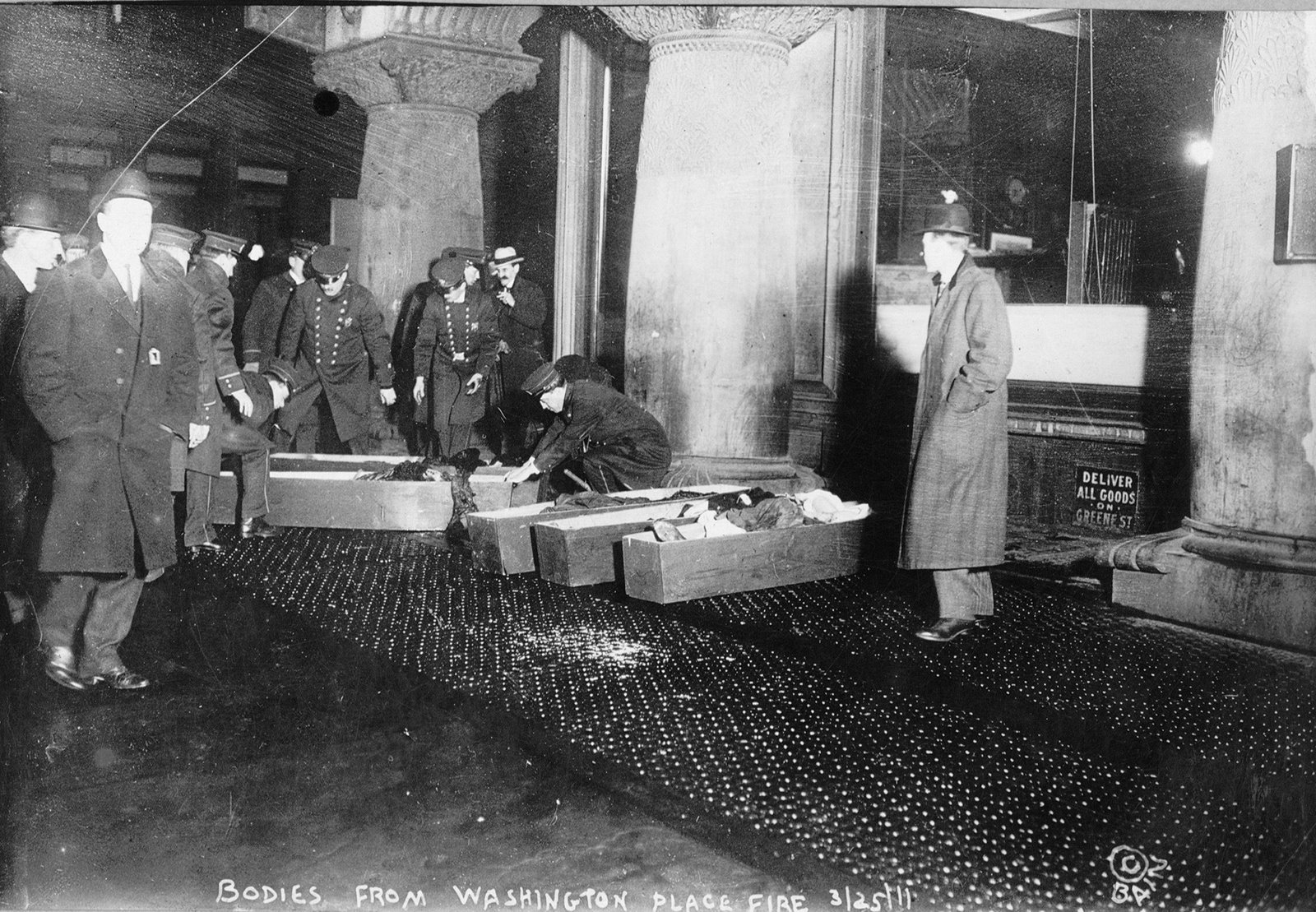 Though the fire forced the Triangle's owners to abandon the factory, the building still stands at the corner of Washington Place and Greene Street. Then known as the Asch Building, it was renovated and reopened the next year. However, a New York Times article from 1913 noted that the building's tenants hadn't learned many lessons from the fire -- "they were, in fact, heaping its floors with scraps of clothing and flimsy material... and permitting smokers to stand near these heaps--(revealing) once more the singular carelessness of humanity." The building was purchased by NYU in 1929 and renamed the Brown Building; today, it houses university classrooms.

Posted by Michelle and James Nevius at 3:51 PM No comments:

James had a story published yesterday on the history of Brooklyn Heights, which was designated a landmark district 50 years ago. Read the full story at Curbed: http://ny.curbed.com/archives/2015/03/18/how_brooklyn_heights_became_the_citys_first_historic_district.php.

(And, ICYMI, James also had an article on Monday on Curbed about Irish heritage in New York.)

Above and below are some of the archival photos (though not, technically, any postcards) that didn't make it into the final story. At the top that's Grace Court Alley, which is likely built over what was originally a Native American trail.

One item we didn't have time to research is the grand, colonnaded building in the illustration above. Does anyone know what it was? If so, leave a comment.

Posted by Michelle and James Nevius at 12:42 PM 1 comment: 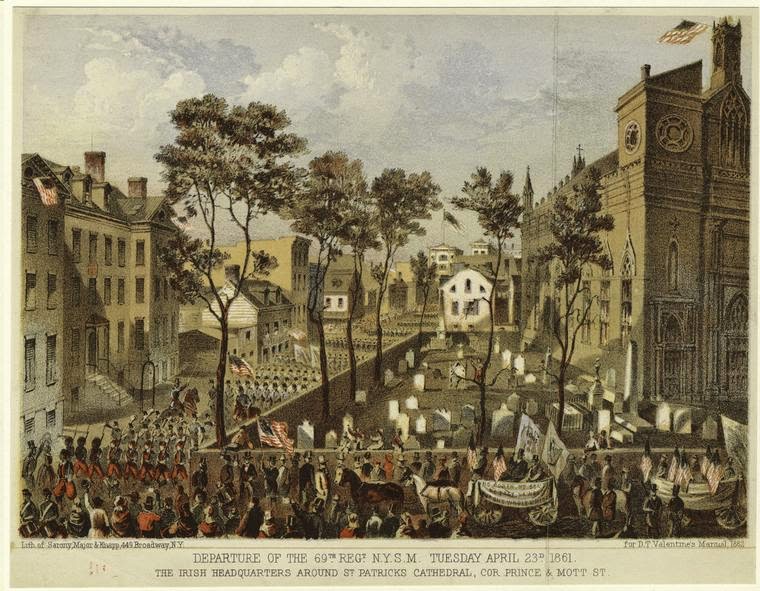 Happy St. Patrick's Day. James had a piece published yesterday on Curbed that explores remnants of Irish history in all five boroughs. Follow this link to read "In Modern-Day New York. Reminders of Irish Roots Abound."

The illustration above shows the Irish 69th regiment leaving from St. Patrick's Old Cathedral at the outbreak of the Civil War. The "Fighting 69th" are memorialized in Calvary Cemetery in Queens -- just one of a dozen places mentioned in the article.


Posted by Michelle and James Nevius at 12:04 PM No comments: 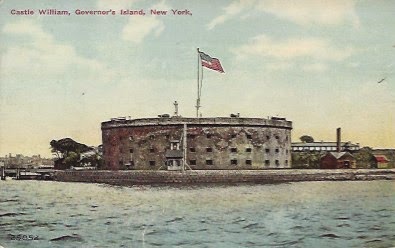 Pictured above is Castle Williams on Governor's Island (erroneously called Castle William in the caption). The fortification was designed by Jonathan Williams, the chief surveyor of the army, and named for him in 1810. Williams is also honored in the name of the Williamsburg neighborhood in Brooklyn, the street plan of which he laid out in 1802.

One of many fortifications built in the run-up to the War of 1812 to protect New York harbor, Castle Williams saw no action at the time because New York City managed to avoid the conflict. Unlike its companion on Manhattan, Castle Clinton, which was quickly transformed for civilian use, this fort stayed in the hands of the military, as Govenors Island was an important army base at the time. During the Civil War, the castle was first used as a barracks and later as a POW camp for Confederate soldiers.

Free, ticketed tours are now offered in the summer when Governors Island is open to the public, which permit visitors to climb to the top level of the fort.

If you are interested in finding out about other extant Civil War sites around the city, check out this piece James wrote for Curbed back in November. 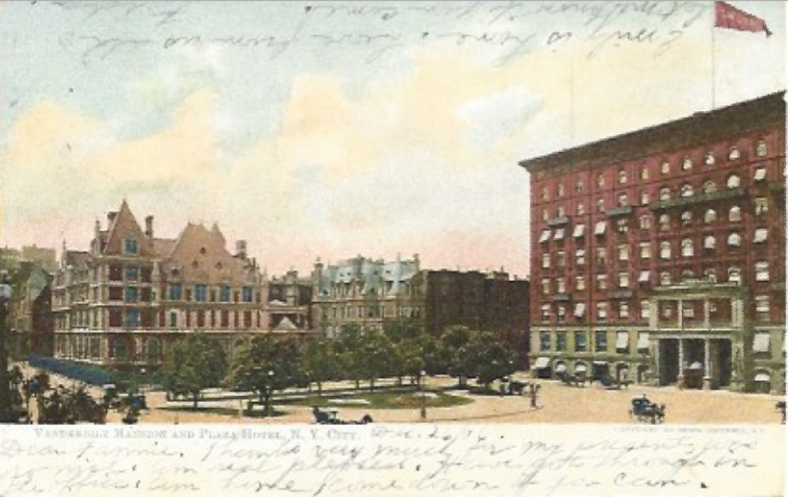 Today's postcard again takes us back to the era before 1907 when messages had to be crammed on the front of the card because the back was reserved solely for the address. You can also date this card as being before 1907 because the building on the right is the original Plaza Hotel. It stood on the exact same spot as the current incarnation, but was only around from 1890 to 1905, when it was demolished so that Henry Hardenbergh's new hotel could be built. 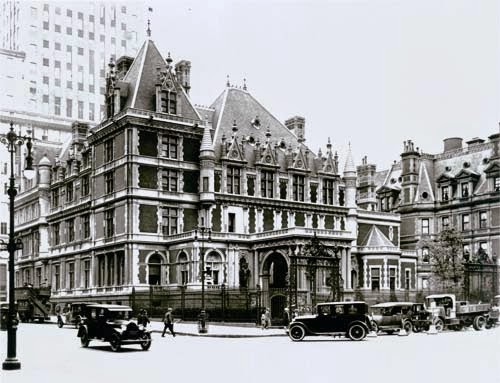 The mansion at the left of the image is the most impressive of the many Vanderbilt mansions that formed a sort of "Vanderbilt Row" on Fifth Avenue south of 59th Street. This was the home of Cornelius Vanderbilt II (grandson of the famous Commodore); at upward of 130 rooms, it remains the largest private residence ever constructed in New York City. The house was built in two phases by George B. Post (architect of the New York Stock Exchange) and Richard Morris Hunt (one of the greatest Beaux Arts architects who also built The Breakers, Vanderbilt's "cottage" in Newport). Sumptuously decorated by artists like John La Farge and Augustus Saint-Gaudens, the house was a showcase for Vanderbilt's wealth and taste, but he only enjoyed it for six years before dying. The house itself only lasted until 1927, when it was torn down for the construction of Bergdorf Goodman.

This card was mailed December 26, 1906, as a thank-you for a Christmas present. To maximize space, the sender wrote it like it was a telegram:


Dear Fannie. Thanks very much for my present, was so nice. Am real pleased. Have got through in the office. Am home. Come down if you can. Emily is here. Love from us all. Let me know if you come.

A few tantalizing remnants of the Vanderbilt house remain, including the entrance gates, which were repurposed for the Conservatory Garden in Central Park and the fireplace mantel, by Saint-Gaudens, now in the Met.

Posted by Michelle and James Nevius at 11:54 AM No comments: