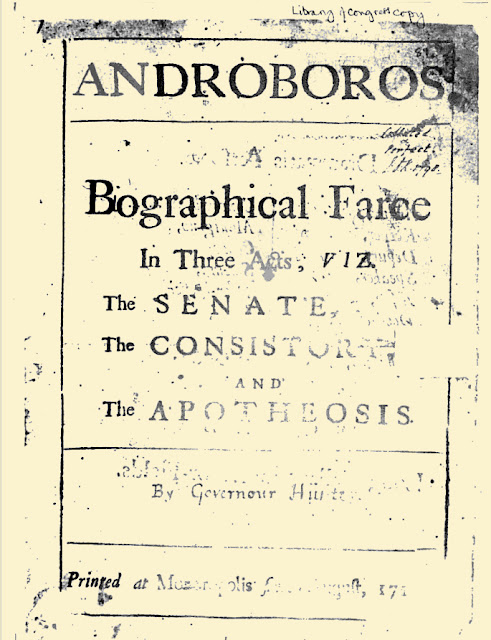 One of the most action-packed but least talked about periods in New York City history is the era immediately following the English takeover of the city in 1664. In the late 17th and early 18th centuries, it seems that there was always someone in the city on the verge of revolt, from the enslaved African population to those citizens who chafed under royal rule. (We write about this era through the perspective of the Delancey family in Footprints in New York.)

In the midst of all this turmoil, Robert Hunter was appointed the royal governor of the colony in 1710. He arrived with 3000 refugees from Germany who he'd promised to resettle in the Hudson Valley, which immediately made him an unpopular figure. (To put this in perspective, New York City's population at the time was probably about 5000 people.)

Hunter locked horns with many figures in New York, perhaps most prominently the Rev. William Vesey, the rector of Trinity Church. At one point, someone broke into the sacristy of the church and befouled the priest's vestments. Vesey blamed Hunter, though no one was ever caught.

Normally, this might be the sort of story we learn about through diaries, or official letters between the governor and his bosses in London. But Robert Hunter, a friend of Jonathan Swift, was also a playwright, and in 1714 he produced the very first play ever published in the American colonies, Androboros ("man eaters"), a thinly veiled satire of his troubles as governor.

The play has never been produced.... 'til now.

On November 4, 5, and 6 -- just in time for the election -- the Peculiar Works Project is staging Androboros in a boxing ring on Bleecker Street. (And it's free!)

Find out more about this production and the play at http://www.peculiarworks.org/androboros2.html.

Posted by Michelle and James Nevius at 11:16 AM No comments:

What does Pocahontas have to do with New York City, you may ask. More than you might think, since the image above -- drawn in 1616 when she was in England -- was widely distributed and altered European views of what North America was like.

But the reason we're highlighting it today is that James had a travel story in the New York Post on Tuesday about visiting Jamestown, Virginia. You can read it at http://nypost.com/2016/10/18/uncover-the-400-year-old-secrets-of-pocahontas/


Posted by Michelle and James Nevius at 5:19 PM No comments: 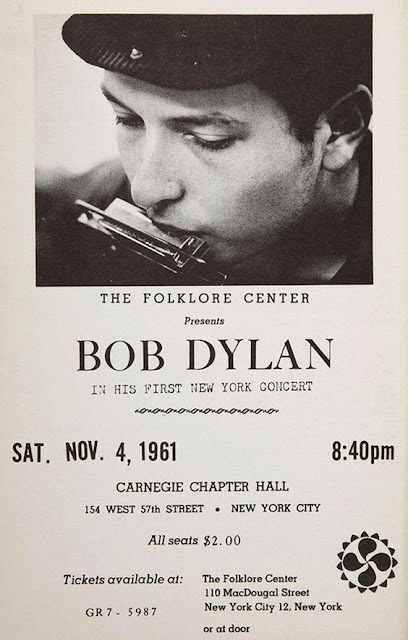 As you may have heard, Bob Dylan was awarded the Nobel Prize for Literature this morning, which came as a shock to just about everyone. He is the first musician to be awarded the honor, and while he has long been seen as the leading figure in post-war music in America, this catapults his reputation to "a whole 'nother level."

We have a chapter about Dylan's New York in Footprints in New York, which includes a good precis of his time in the city.

As we write in the book, Dylan was


born as Robert Zimmerman in Duluth, Minnesota, on May 24, 1941; he grew up in the tight-knit Jewish community in Hibbing, his mother’s hometown. After graduating high school in 1959, he enrolled at the University of Minnesota but only lasted one year. While he was there, he tapped into the burgeoning folk scene and began consistently using the stage name Bob Dylan. Having been a rock and roller, Dylan’s musical trajectory changed around this time when he was introduced to the music of Woody Guthrie, which, in Dylan’s words, “made my head spin.”

There's much more in the book -- pick up a copy today!

Posted by Michelle and James Nevius at 3:55 PM No comments:

REMINDER: Central Park Walking Tour this Sunday at 10:00 AM 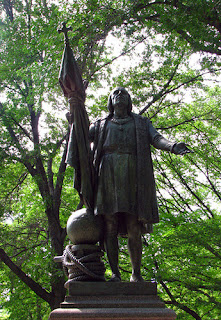 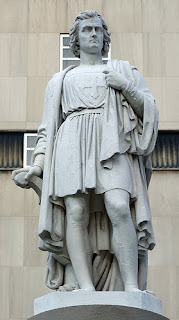 On Sunday, October 9, at 10:00 a.m. join us for a walk in and around Central Park as we celebrate Columbus Day and ask the question: Who was Christopher Columbus and Why does he deserve a holiday? As we look at the creation of Columbus Day back in 1892 and the explorer's controversial popularity, we'll talk about the importance of Italian-Americans to the history of New York City as well as looking at how Central Park was created as a social experiment to help the city's immigrants. The tour will last between 90 minutes and 2 hours.

Send an email with your name, the number in your party, and a contact cell phone number to
walknyc@gmail.com

We will get back to you with the starting place within 24 hours.

Hope to see you on October 9!

Posted by Michelle and James Nevius at 10:23 AM No comments: