Tonight, an estimated billion people around the world will watch the illuminated ball drop in Times Square to ring in the new year. This New Year’s tradition dates back 106 years—the dropping ball replaced an earlier fireworks display—but the notion of dropping a ball as a way of keeping time is an older tradition.

In 1877, a ball was added to the top of the Western Union Building on Lower Broadway. Each day at noon, a telegraph signal from Western Union’s main office in Washington, DC, would trip a switch in New York and the ball would descend from the flagpole. Visible throughout the Financial District—and, more importantly, from all the ships in the harbor—it allowed people to reset their watches and ship chronometers. For the first time, New York ran on a standard time.

As the New York Times noted in 1877, this idea of a ball dropping to keep the time wasn’t new. For many years prior to the Civil War, the New York custom house had signaled the time with a ball drop and in the 1870s it was common to find time balls in major European ports. However, when it began operation in April 1877, the Western Union ball was the only one in a North American port and quickly became a fixture of the Manhattan skyline.

(Western Union, afraid that it wasn’t always going to work, set up a system whereby a red flag would be flown from 12:01 to 12:10 p.m. on days that the ball refused to drop. Further, information would be sent to the press each day informing them whether the ball actually dropped at noon or had fallen at the wrong time!)

In 1907, the New York Times—then owners of the skyscraper from which the ball drops on New Year’s Eve—adopted the time ball as their symbol for ushering in the new year. That original Times Square ball, made of iron and wood and lit by 25 incandescent lights, weighed 700 pounds!

In 1911, the original Western Union Building was demolished by the company’s new owners, AT&T, so they could erect a larger structure. (That impressive marble building, known as 195 Broadway, still stands.) Plans called for a new time ball, but by the time the new AT&T headquarters was finished, the ball had been replaced by a giant, gilded statue by Evelyn Beatrice Longman called The Genius of Electricity. (The statue remained on the building until 1980, when it was removed, restored, and installed in lobby of the AT&T headquarters in Midtown. It now resides in Dallas, Texas.)

The current time ball, lit by energy-efficient LED diodes, now stays atop the old Times Building year round so that everyone who visits New York can see the actual ball that drops on New Year’s Eve.

[This article was adopted from an earlier post from 2009.]

Posted by Michelle and James Nevius at 11:42 AM No comments: 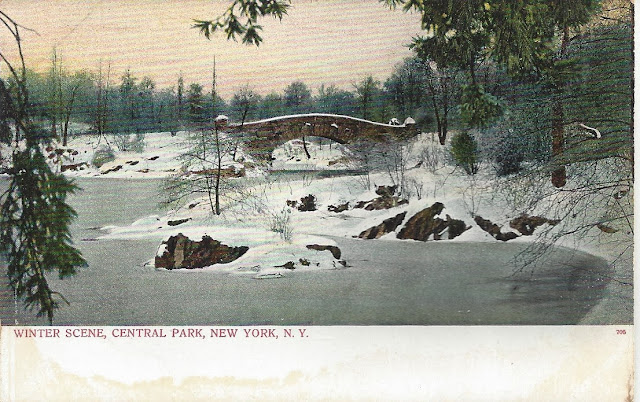 Welcome to our new feature, "Postcard Thursday," in which we dive into our extensive archive of New York City scenes to find some gems.

This unusual shot just came into our possession recently. There's no publication date or copyright on the card, but it has to be from 1907 or earlier. Prior to that year, messages had to be only on the front side of card (that's what the little white space at the bottom is for); the back was reserved entirely for the recipient's address.

Early Central Park views have a tendency to be spring and summer images, focusing on the Mall, Bethesda Terrace, Bow Bridge (then known as Swan Bridge) and a few other architectural features. Winter views are less common, even though more people came to park in winter than in summer during its first years in operation. What drew many winter revelers were the Lake and Pond--both used for ice skating--and the carriage drive, which could used for sleighing.

The view in this card is Gapstow Bridge, which crosses the Pond in the southeast corner of the park. When this image was created, the pond was bigger--it used to go all the way to the area occupied by Wollman Rink. 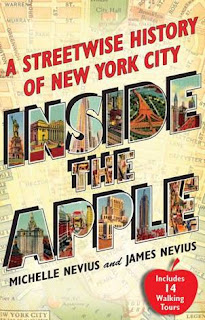 or in our new book:

The birth of Central Park is a chapter in Footprints in New York; the book is out April 15, 2014, but you can pre-order today.


Posted by Michelle and James Nevius at 11:35 AM No comments:


If you are museum-hopping this holiday season, be sure to check out the new show at the Museum of the City of New York, "Gilded New York." This compact exhibition focuses on the fashion, grand balls, and over-the-top architecture of the period after the Civil War when wealthy New Yorkers were become richer than ever before.

As it is the inaugural exhibition in the new Tiffany & Co. Foundation Gallery, the jewelry is the star of the show:

Also worth exploring are the video monitors outside the gallery, which cycle through images of Gilded-Age parties (some of the clothes and accessories from which are on display), along with an excellent slideshow of the extravagant Fifth Avenue mansions that, in many cases, lasted just one generation.

Four chapters in our new book Footprints in New York cover the Gilded Age, from Mrs. Astor's grand balls to J. Pierpont Morgan's contributions to the city. The book is out April 15, 2014, but you can pre-order today.

And, of course, Inside the Apple has some wonderful insights on the period as well. With priority shipping from Amazon, you can still get it there in time for Christmas!

Posted by Michelle and James Nevius at 10:27 AM No comments: 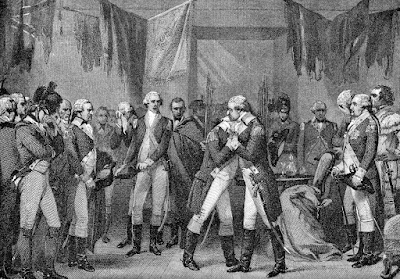 On December 4, 1783--two hundred and thirty years ago today--George Washington hosted a dinner for his officers in the Long Room at Fraunces Tavern. It was his final act as commander in chief of the Continental Army and, as far as he knew, also his farewell to New York City.

Fraunces Tavern was one of Washington’s favorite places in the city and Samuel Fraunces, its proprietor, would eventually leave to become Washington’s personal steward.

On December 4, he held a banquet there to honor his officers and to say farewell:

"With a heart full of love and gratitude, I now take leave of you; I most devoutly wish that your latter days may be as prosperous and happy, as your former ones have been glorious and honourable… I cannot come to each of you to take my leave, but shall be obliged to you, if each of you will come and take me by the hand."

When the feast was over, a tearful Washington headed to the ferry slip, boarded a boat, and sailed to New Jersey. The next day, he began his journey south to turn in his commission and retire to Mt. Vernon.

Washington's retirement, of course, turned out to be short-lived, and after presiding over the Constitutional Convention, he returned to New York in 1789 to be America's first president.

Fraunces Tavern still sits on Pearl Street, though the building that's there today probably doesn't much resemble the place that Washington knew. Still, a reconstructed Long Room is on view upstairs, furnished much as it would have been when Washington dined there. See more at http://frauncestavernmuseum.org/


Our forthcoming book
Footprints in New York: Tracing the Lives of Four Centuries of New Yorkers
has a chapter about Fraunces Tavern and its original occupants,
the DeLancey family.

Posted by Michelle and James Nevius at 10:16 AM No comments:

Inside the Apple + Footprints in New York 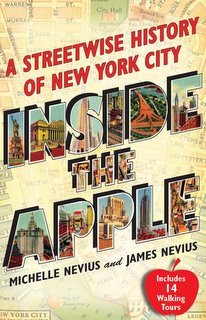 Has everyone recovered from their Thanksgiving holiday? Today, as you may know, has been dubbed "cyber Monday," a day feauturing online deals. If you are shopping for your friends who love New York, why not a copy of Inside the Apple? You may already have one (you do, don't you?) but maybe other NYC fans aren't so fortunate.

The New York Times called Inside the Apple "a smart and entertaining window on the city of the past." Library Journal's "BookSmack!" praised it as "well written, readable, and interesting.... The book's final section of 14 walking tours brings these abstractions alive. Each location has its degree of awesome."

Today, Amazon.com is offering 30% off any single book if you use the promo code BOOKDEAL. That would take Inside the Apple down to $8.56--a real steal.

Or maybe you'd like to give a present to yourself....

Our forthcoming book, Footprints in New York: Tracing the Lives of Four Centuries of New Yorkers, doesn't come out until April 15th next year, but if you order it at Amazon.com today using the BOOKDEAL promo code, it will come out just $8.39--over ten dollars off the cover price. Order it today and it will ship in April when the book is ready.

We hope you have a wonderful holiday season! When Footprints in New York comes out in the spring, we'll be conducting special tours, giving talks and signings, and more. We'll keep you in the loop!

Posted by Michelle and James Nevius at 8:55 AM No comments: