Robert Fulton and the Age of Steam 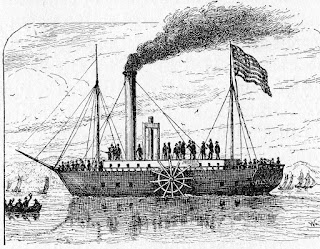 August 17, 1807 -- 203 years ago today -- was a pivotal moment in American history. Today marks the anniversary of the launch of Robert Fulton's North River* Steamboat. The boat left its slip in Lower Manhattan and steamed up the Hudson River, arriving in Albany fifty-two hours later. This maiden voyage proved that steam was an efficient and safe mode of transport and while clipper ships would not instantly disappear, the introduction of steam vessels forever changed maritime transportation.

Fulton started life as a painter, but his penchant for mechanical engineering led him to design the first practical submarine (which he tried, in vain, to sell to Napoleon) and then to turn his attention to steam navigation. In France, Fulton met Robert Livingston, the U.S. Minister and former Chancellor of New York State, who decided to bankroll Fulton in order to secure New York's preeminence as a commercial port. Fulton returned to the U.S., set up shop in Manhattan, and perfected his engine.

On August 17, 1807, the boat, christened with the rather prosaic name North River Steamboat, left New York harbor en route to Albany. It arrived 52 hours later: 32 hours of that was steaming, and twenty hours was a diversion to Robert Livingston’s Hudson River estate, Clermont (where, presumably, the Chancellor took a long nap). The return trip, the next day, took just 30 hours and within a month twice-weekly service was scheduled between the two cities, averaging 36 hours per trip. (Hudson River sloops, by contrast, averaged a week for the same trip.)

In her own day, the boat was only called by her own name, North River Steamboat, or simply “The Steamboat” (since she had no competition). It was only after Fulton’s death in 1815 that the name of Livingston’s estate, Clermont, became commonly associated with the vessel.

Chancellor Livingston was more than just Robert Fulton's patron -- he soon became his de facto father-in-law, when Fulton married Livingston's second cousin Harriet (who was the same age of the Chancellor's daughters). When Fulton died in 1815, he was buried in the churchyard of Trinity, Wall Street. However, he is not buried underneath the large marker in the south side of the yard that bears Fulton's portrait. That marker was erected by the Society of Mechanical Engineers in 1901 to stand in a high-traffic part of the graveyard and draw attention to their hero. Fulton is instead buried in the Livingston family's nondescript vault in the north side of the graveyard. If you happen to be downtown today, stop by Trinity and pay your respects to the man who in many ways secured New York's place as the economic capital of America.

* Until the 20th century, the Hudson River was
more commonly known as the North River.

Read more about Robert Fulton and the age of steam
in Inside the Apple: A Streetwise History of New York City.

Posted by Michelle and James Nevius at 3:23 PM