Thank you for another year of great blogging. We wouldn't do this without you--our readers--and we appreciate all the feedback throughout the year.

Since a question we get asked a lot is "Why does the ball drop on New Year's Eve?" we are running below our previous post on the subject. Enjoy!

Tonight, an estimated billion people around the world will watch the illuminated ball drop in Times Square to ring in the new year. This New Year’s tradition dates back 102 years—the dropping ball replaced an earlier fireworks display—but the notion of dropping a ball as a way of keeping time is an older tradition.

In 1877, a ball was added to the top of the Western Union Building on Lower Broadway. Each day at noon, a telegraph signal from Western Union’s main office in Washington, DC, would trip a switch in New York and the ball would descend from the flagpole. Visible throughout the Financial District—and, more importantly, from all the ships in the harbor—it allowed people to reset their watches and ship chronometers. For the first time, New York ran on a standard time.

As the New York Times noted in 1877, this idea of a ball dropping to keep the time wasn’t new. For many years prior to the Civil War, the New York custom house had signaled the time with a ball drop and in the 1870s it was common to find time balls in major European ports. However, when it began operation in April 1877, the Western Union ball was the only one in a North American port and quickly became a fixture of the Manhattan skyline.

(Western Union, afraid that it wasn’t always going to work, set up a system whereby a red flag would be flown from 12:01 to 12:10 p.m. on days that the ball refused to drop. Further, information would be sent to the press each day informing them whether the ball actually dropped at noon or had fallen at the wrong time!)

In 1907, the New York Times—then owners of the skyscraper from which the ball drops on New Year’s Eve—adopted the time ball as their symbol for ushering in the new year. That original Times Square ball, made of iron and wood and lit by 25 incandescent lights, weighed 700 pounds!

In 1911, the original Western Union Building was demolished by the company’s new owners, AT&T, so they could erect a larger structure. (That impressive marble building, known as 195 Broadway, still stands.) Plans called for a new time ball, but by the time the new AT&T headquarters was finished, the ball had been replaced by a giant, gilded statue by Evelyn Beatrice Longman called The Genius of Electricity. (The statue remained on the building until 1980, when it was removed, restored, and installed in lobby of the AT&T headquarters in Midtown. It now resides in Dallas, Texas.)

Read more about the history of Times Square in
Inside the Apple: A Streetwise History of New York City.

Posted by Michelle and James Nevius at 12:05 PM No comments: Links to this post

Dirigibles atop the Empire State Building 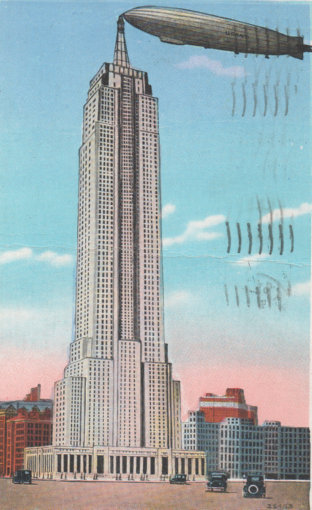 If you've read Inside the Apple (and if you haven't, there's no reason not to start today), you know that the Inside the Apple archives are chock full of old postcards of New York City. One recent addition to that collection was this wonderful shot of a dirigible moored to the top of the Empire State Building.

Despite the fact that this did not -- and could not -- happen, the image of an airship floating above the skyline has become a remarkably durable image of New York.

As we write in the book, the Empire State Building was in competition with the Chrysler Building and 40 Wall Street to claim the title of world's tallest building. Famously, the Chrysler Building had beaten 40 Wall by constructing a secret spire, or "vertex," that was put into place in October 1929.

After William Van Allen revealed the Chrysler Building’s vertex, it became imperative to make the Empire State Building taller without adding a “useless” spire. To that end, Smith announced in December 1929 that the top of the Empire State would house a mooring mast, 1,300 feet from the ground, for transatlantic dirigibles. 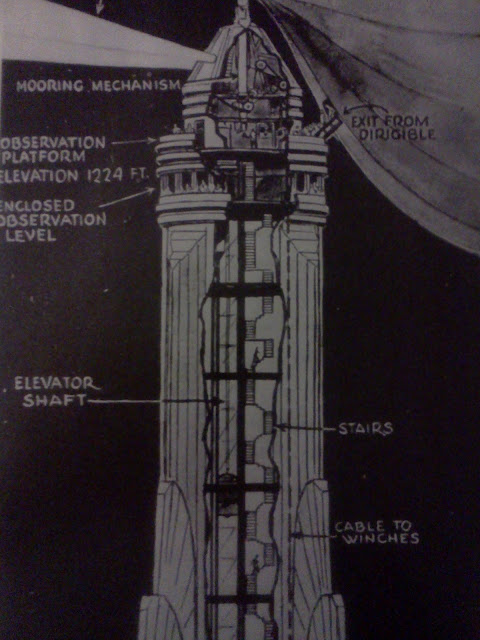 Six years later, the Hindenburg would explode in New Jersey putting an end to any thoughts -- real or imagined -- of dirigibles mooring in Manhattan.

Read more about the history of the Empire State Building in


Posted by Michelle and James Nevius at 11:25 AM No comments: Links to this post

Doing research on a completely different topic, we stumbled upon the blog Computational Story Lab ++;, a collection of musings from a "group of applied mathematicians working on large-scale, system-level problems" at the University of Vermont.

The article we found posed the beguiling question, "What's the happiest place in New York City?" You can read the full post here, but the gist of their admittedly non-scientific inquiry was to use a list of words that had previously been ranked as indicators of happiness and connect them to geotagged Twitter posts throughout the city. (Note: from the blog, it appears that their research focused only on Manhattan, but it could be that the outer boroughs simply did not have as much data.)

So, what's the answer? Not surprisingly, the highest number of positive tweets come from within Central Park, and in the park the highest ranked place seems to be somewhere near the hypothetical intersection of Seventh Avenue and West 77th Street. This is on the Ramble side of the lake and is full of serene and picturesque spots. Nearby highlights include the Ramble Stone Arch (pictured above) and the recently rebuilt Oak Bridge.

What's your happiest place in the city? Let us know and maybe we can include it in a future post.

Posted by Michelle and James Nevius at 11:36 AM No comments: Links to this post

George Bellows at the Metropolitan Museum 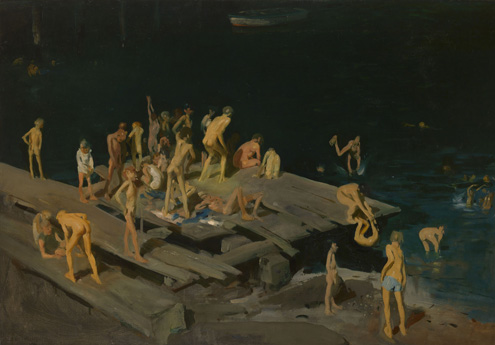 From now until February 18, 2013, you have the opportunity to see a remarkable exhibit at the Metropolitan Museum of Art, "George Bellows." This retrospective of the artist's short career is filled with wonderful paintings of New York City, where Bellows lived and worked from 1904 to his death in 1925.

Bellows came to New York at the age of 22 to pursue his dream of becoming a painter. He studied at the New York School of Art under Robert Henri and was pushed -- along with classmate Edward Hopper -- to capture New York in its gritty realism. 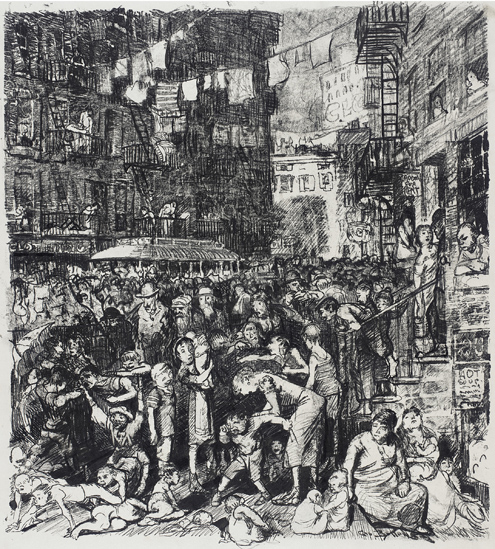 Among Bellows favorite subjects were the immigrants of the Lower East Side; one section of the exhibit chronicles the development of his image "The Cliff Dwellers," -- a chaotic Lower East Side street scene -- as a painting, watercolor, and lithograph. Bellows was also drawn to the edges of the island, and the show features many scenes of the East River, Hudson River, Battery Park, and Riverside Park, a locale the artist would return to again and again. 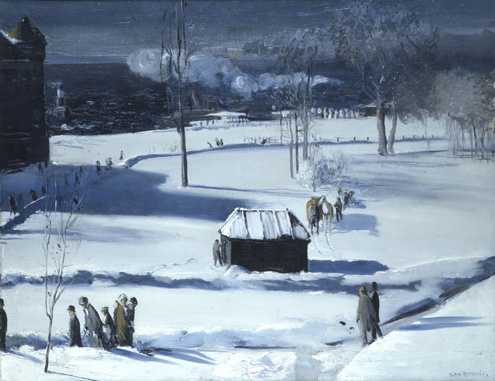 Seeing these images reproduced in two dimensions on a computer screen doesn't do them justice. If you are going to the Met this holiday season, do stop by the Bellows show. It's a compact exhibit and well worth your time. 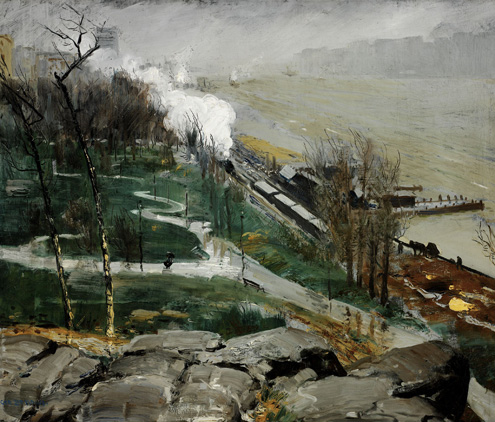 Read more about the arts in New York in
Inside the Apple: A Streetwise History of New York City.

Posted by Michelle and James Nevius at 11:19 AM No comments: Links to this post