The Death of Anne Hutchinson 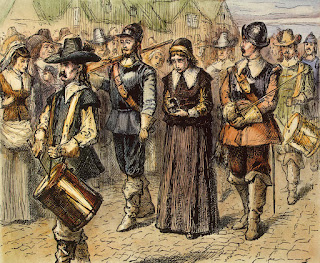 If you happen to be driving up the Hutchinson River Parkway tomorrow, you might pause a moment to think about the road's namesake, religious dissenter Anne Hutchinson, who was killed on August 20, 1643, somewhere in the vicinity of Split Rock, where the parkway meets the New England Thruway.

Anne Hutchinson, born in England in 1591, came to Massachusetts in 1634 with her husband, William. A "woman of ready wit and bold spirit" (as John Winthrop called her), Hutchinson's religious views soon ran afoul of the Puritans in the Massachusetts Bay Colony. Among other things, she promoted the role of women in the church--a challenge to the male-oriented orthodoxy of Puritan religion--as well as deviating from their teachings. Most importantly, she challenged the Puritan establishment over the age-old conflict of grace vs. works. Hutchinson believed that the Puritans were teaching people to achieve salvation through "good works," which made them little different in her eyes than Roman Catholics. Hutchinson argued that it didn't matter whether those who were saved did good works or not--they were members of the body of the elect no matter what. Hutchinson also claimed that she could tell who those saved souls were.

Branded a heretic, she was banished from Massachusetts and she and her followers moved to Portsmouth, Rhode Island. But soon after her husband's death, Hutchinson moved farther south to what was then New Netherland and settled in the Bronx near the Split Rock, a giant glacial erratic that had calved in two sometime during the last Ice Age.

On August 20, 1643, Hutchinson's family was attacked by a group of Native Americans. This was during the era in Dutch Colonial history known as Kieft's War. Not so much a war as a series of skirmishes between the Dutch and the Native Americans, it was a bloody period marked by a high number of civilian deaths. Hutchinson and her family, living in an isolated area, were likely easy targets. Only one of Hutchinson's daughters survived--legend has it by hiding in the split of the Split Rock--and she was taken and raised by the Natives.

Today, it is difficult, but not impossible, to visit the site of the massacre. Blake Bell gives instructions on his informative Historic Pelham blog.

Read much more about the history of New Netherland in
Inside the Apple: A Streetwise History of New York City.
To get RSS feeds from this blog, point your reader to this link.
Or, to subscribe via email, follow this link.
Posted by Michelle and James Nevius at 8:33 AM