If you’re not familiar with the Metropolitan, the theater is dedicated to reviving plays from the American canon, many of which have needlessly fallen by the wayside. The Henrietta is no exception--written and first performed in 1887, the play was a smash, running on Broadway for years. The comedy centers on an old Knickerbocker family, the Van Alstynes. Old Nick, the patriarch, is a king of Wall Street, and is about to speculate the family fortune on a secret investment called “The Henrietta.” Meanwhile, daughter Mary has brought home a beau who wants to blow all his money on a horse, also named Henrietta. Son Bertie is caught by his beloved with a portrait in his room...of a dancer named Henrietta. (You can see where this is going.)


After the matinee performance on Sunday, June 16, we’ll be taking questions from the audience about the city as depicted in Howard’s play, as well as leading theater-goers on a “virtual” walk through 1887 New York. Among other things that happened that year: Nellie Bly went undercover in a madhouse, renowned minister Henry Ward Beecher died, and the Eldridge Street Synagogue opened on the Lower East Side.


You can read more about the play at http://www.metropolitanplayhouse.org/essayhenrietta.


Tickets can be purchased online at http://www.metropolitanplayhouse.org/tickets.


We hope to see you there! The theater is located at 220 East 4th Street (between Avenues A & B); for directions visit http://metropolitanplayhouse.org/location.

Posted by Michelle and James Nevius at 11:37 AM No comments:

"Here and There" by Maya Lin

Now through June 22, you have the opportunity to see Maya Lin's exhibition of New York-inspired sculpture at the Pace Gallery at 32 East 57th Street. The show, titled "Here and There," focuses on Lin's interest both in geographical forms and the pressing issue of climate change.

This is a small show--other than the video memorial What is Missing?, it fits in one room--which gives you time to study each of the works at leisure. For those interested in cartography, nature, and the intersections between map-making and art, this show is well worth a visit. The gallery is open Tuesday-Friday, 9:30am-6:00pm and Saturday, 10:00am-6:00pm.

* * * *
Inside the Apple: A Streetwise History of New York City.

Posted by Michelle and James Nevius at 11:01 AM No comments:

The Birth of the Postcard

We were at the Metropolitan Postcard Club's annual show this weekend adding to the Inside the Apple archives, when we noticed that we were visiting on an auspicious date. Yesterday was the 115th anniversary of the birth of the modern postcard.

Prior to May 19, 1898, postcards were primarily the domain of the United States Postal Service, which had been issuing pre-stamped, one-cent cards since 1873. These cards were mostly unadorned. While pivate companies did issue cards during this time--predominantly as advertisements--they required a two-cent stamp, making them the same price as a letter, and, thus, impractical and unpopular. 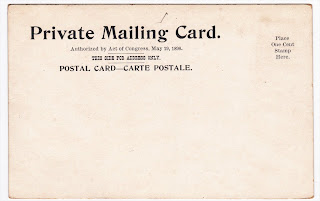 In 1898, Congress decided to allow privately printed cards to go out for the one-cent rate. To distinguish these cards from government issue, they were marked "Private Mailing Card." Until 1907, the back of the card was reserved exclusively for the recipient's address. Only a small white band below the illustration on the front could be used for a message, making it the Twitter of its day. These brief messages are often nothing more than "Hope you are well," "Wish you were here," or, simply, "Received your card," which makes one wonder if some cards went back and forth in an endless loop. 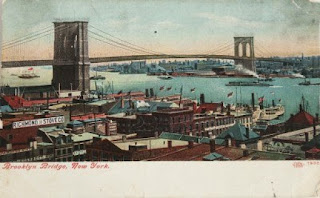 In 1907, Congress agreed to allow both the message and the address on the back of the card, creating the postcard format that we know today. 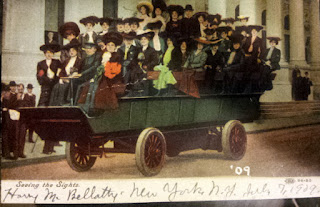 We've featured some of our postcard collection in previous blog posts and, of course, they are prominently on display in Inside the Apple: A Streetwise History of New York City. One nice find this weekend was this illustration of one of New York's earliest sightseeing companies setting out from Twenty-Third Street. Notice that even though the postcard is from 1909, it still has space for only a brief message on the front. Either this was older stock still being sold two years later or it was just easier to reprint the older cards rather than design new ones.


See more of our collection in
Inside the Apple: A Streetwise History of New York City.

Posted by Michelle and James Nevius at 11:31 AM No comments: 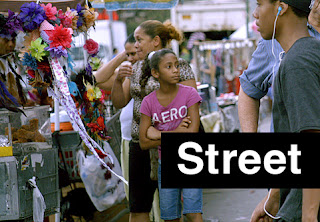 If you haven't had a chance to see it yet, you only have until May 27th to see James Nares's "Street" at the Metropolitan Museum, a captivating one-hour film about the city.

Shot over the course of a week in 2011, Nares used a high-definition camera to slow down the movements of the people (and, sometimes, birds) on the street to a virtual crawl. Because the camera captures everything in such high fidelity, nothing is blurry and the details are fantastic. If, like us, you spend a lot of time walking in the city, you'll recognize some of the streets that Nares filmed while others will make you wonder, "Where is that?"

The film, with an ethereal soundtrack by Thurston Moore, runs about an hour. There are benches in the gallery, but many people simply lounge against the back wall or on the floor. In the accompanying galleries, Nares has put together an assemblage of objects from the Met's collection as a sort of commentary on the film. This isn't always successful, but there is some great early film footage of the Lower East Side and the Flatiron building that seems directly pertinent to Nares's work. In particular, look for children in each film who notice the camera and chase after it.


Posted by Michelle and James Nevius at 8:23 AM No comments:

Memorial Day Walking Tour of Alexander Hamilton's New York
Monday, May 27, at 11:00AM

This Memorial Day, join us for a walk through Lower Manhattan concentrating on our hometown Founding Father, Alexander Hamilton -- statesman, ladies man, architect of American finance, and lousy duellist. We will talk about New York in the years running up to the Revolutionary War, explore places Hamilton was stationed with his artillery company during the war, and visit the great man’s final resting place to honor his memory.*

Meeting place and other details will be forwarded to you when you reserve. Payment is by cash only at the time of the tour. Space is limited, and reservations will be taken on a first-come, first-served basis.

To reserve, email us at info@insidetheapple.net with:

* Your name
* The number in your party
* A contact number for that day in case there are any last-minute changes.

Copies of Inside the Apple: A Streetwise History of New York City will be available for sale and signing.

See you there!
Michelle & James


* There’s a small chance the graveyard will be closed for the holiday; if so, we’ll improvise.
Posted by Michelle and James Nevius at 10:42 AM No comments:

Scott and Zelda and the Plaza Hotel

With Baz Luhrmann's Great Gatsby being released today in eye-popping 3D (it's either "overwrought, asinine, exaggerated and boring" [Rex Reed] or "the first must-see film of Hollywood’s summer season" [The New York Post]), the F. Scott Fitzgerald hype machine is in overdrive. We thought we'd join the party with a quick look at the New York City locale most associated with the Fitzgeralds: the Plaza Hotel. Scott and his wife, Zelda, loved the Plaza, dining there, staying there, and--if the rumors are true--even frolicking fully clothed in the Pulitzer fountain out front one night.

Not long after Scott and Zelda married in 1920, they rented an apartment at 38 West 59th Street. Since neither liked to cook, the Plaza's Grill Room--the casual basement restaurant/speakeasy--became a regular dinner haunt. Scott kept his own personal bottle of liquor stashed there and when his second novel, The Beautiful and the Damned, came out in 1922, the Grill Room was featured. As the novel is widely thought to be based on the Fitzgeralds' own life, that seems only fitting. When The Great Gatsby was released three years later, the Plaza again played a crucial role, with a fiery showdown between Tom and Gatsby taking place in one of the hotel's suites. Considering Scott's combative nature when he'd been drinking, one wonders how much of him is present in Gatsby (or Tom, for that matter).

After they'd moved out of the city, the Fitzgeralds returned to stay at the hotel or have tea at the Palm Court with friends. (Fitzgerald's affection for the hotel was so great that Ernest Hemingway once joked that when Scott died his liver should go to Princeton and his heart to the Plaza.)

Then there's that fountain escapade, which--like most good stories from the Roaring Twenties--may be apocryphal. Some versions have Scott and Zelda going for an evening swim in the fountain, drunk. Other versions insist it was Scott alone, and stone-cold sober. Either way, it can't have been too much out of character. In 1922, painter Reginald Marsh designed a scenic curtain for a show called Greenwich Village Follies. He crammed every Twenties luminary into the scene and placed at its center--rising from the fountain in the middle of Washington Square Park--Zelda Fitzgerald. 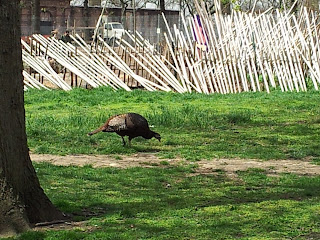 Most of the Plaza that the Fitzgeralds knew is gone, of course. The Grill Room didn't even make it to the end of the 1920s. In conjunction with the new film, there is now a Gatsby/Fitzgerald suite (so that you can have your own wild parties, presumably). However, if you really want to commune with the spirit of at least one Fitzgerald, head down to Battery Park, where a wild turkey, named in honor of Zelda Fitzgerald, carries on the spirit of twenties.

Posted by Michelle and James Nevius at 9:50 AM No comments:

David and Goliath: Remembering Jane Jacobs' Legacy on Her Birthday 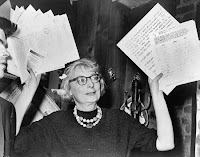 We've written another piece for GOOD magazine, in conjunction with the celebrations of Jane Jacobs birthday and GOOD's "Fix Your Street" challenge.

You can read Jane Jacobs piece here and our write-up about New York City stoops from last week here.

* * * *
Find out more about Robert Moses and Jane Jacobs in
Inside the Apple: A Streetwise History of New York City.

Posted by Michelle and James Nevius at 2:08 PM No comments: