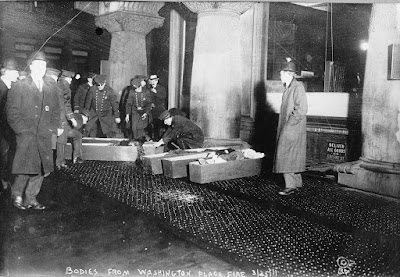 Today, March 25, marks the 98th anniversary of the tragic fire at the Triangle Shirtwaist Factory that claimed the lives of 148 young women and ushered in an era of renewed efforts to unionize New York's garment industry and protect the lives of its workers.
As we write in Inside the Apple:

On the day of the fire, a Saturday, only about half of the factory’s 500 employees had come to work. Just as the afternoon shift was ending, a fire broke out on the eighth floor. Typical of garment centers of the day, the factory floor was a virtual tinderbox, with clothes, scraps of cloth, and unswept trimmings everywhere. When the fire started, the majority of the workers on the eighth and tenth floors were able to escape, but those on the ninth floor had been locked in. This was done, some speculated, to cut down on unauthorized breaks, though it is also likely that it kept union organizers off the factory floor. Soon the elevators stopped working, which meant that the only remaining exit was the fire escape. Tragically, the fire escape had been poorly installed and maintained, and when too many young women began to climb down, it collapsed beneath their weight, sending them plunging to their death. The rest of the women on the ninth floor were then faced with jumping out of windows or waiting to burn to death. Many chose the former, raining down on the assembled crowd from above. The fire department did arrive, but as their ladders reached no higher than the sixth floor, it did little to save the women. In the end, 148 women died, most of them at the scene. Almost entirely immigrants from Little Italy and the , some were only thirteen years old.

Though the fire forced the Triangle's owners to abandon the factory, the building still stands at the corner of Washington Place and Greene Street. Then known as the Asch Building, it was renovated and reopened the next year. However, a New York Times article from 1913 noted that the building's tenants hadn't learned many lessons from the fire -- "they were, in fact, heaping its floors with scraps of clothing and flimsy material... and permitting smokers to stand near these heaps--(revealing) once more the singular carelessness of humanity."
The building was purchased by NYU in 1929 and renamed the Brown Building; today, it houses university classrooms.
* * *
Much more about the Triangle fire and other Greenwich Village people, events, and landmarks can be found in Inside the Apple: A Streetwise History of New York City, which is now officially out! You can buy it from online retailers, check out whether it is carried in-store at your local Barnes & Noble or Borders, or look for it at your neighborhood independent retailer.
* * *
To get RSS feeds from this blog, point your reader to this link. Or, to subscribe via email, follow this link.
Posted by Michelle and James Nevius at 11:28 PM

this is a very nice and helpful artical to anyone who is or wants to study about the triangle shirtwaist factory fire you could learn alot from it.