Charles Dickens and the Five Points

Five Points: for those in the know, the name itself conjures up the worst imaginable New York, a slum of utter poverty and degradation. In recent years, Five Points has had a bit of a renaissance with Kevin Baker’s Paradise Alley, Tyler Anbinder’s masterful history Five Points, and Martin Scorsese’s fantasia on Herbert Asbury’s The Gangs of New York.

But the first—and in some ways still the most influential—chronicler of Five Points was Charles Dickens, who wrote about the neighborhood in his 1842 travelogue American Notes for General Circulation. 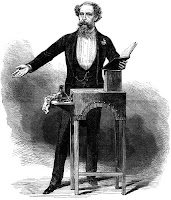 Dickens came to America to do research for an American book. Though he was a popular author in America, the lack of international copyright or royalties meant that his book sales netted him little or no cash. Thus, the only way for him to make money off America was to write about America. (In the end, Dickens produced two books based on his American trip—American Notes and the fictional Martin Chuzzlewit.)

Dickens was in New York from February 12 to March 5, during which time he was feted at a “Boz Ball,” had dinner with Washington Irving, and complained “I am sick to death of the life I have been leading here—worn out in mind and body—and quite weary and distressed.”

But in the midst of being wined and dined, he also had time to visit the House of Detention (aka the Tombs), the city penitentiary, the asylum, and Five Points.

In American Notes, Dickens writes about the Tombs:

What is this dismal-fronted pile of bastard Egyptian, like an enchanter’s palace in a melodrama? A famous prison, called The Tombs. Shall we go in?

So. A long narrow lofty building, stove-heated as usual, with four galleries, one above the other, going round it, and communicating by stairs. Between the two sides of each gallery, and in its centre, a bridge, for the greater convenience of crossing. On each of these bridges sits a man, dozing or reading, or talking to an idle companion. On each tier are two opposite rows of small iron doors. They look like furnace doors, but are cold and black, as though the fires within had all gone out….

A man with keys appears, to show us round. A good-looking fellow, and, in his way, civil and obliging.

“Are those black doors the cells?”

“Are they all full?”

“Well, they're pretty nigh full, and that's a fact, and no two ways about it.”

“Those at the bottom are unwholesome, surely?”

“Why, we do only put colored people in ’em. That's the truth.”

But by far the most famous passage from Dickens’s New York stay is his description of Five Points:

Let us go on again, and … plunge into the Five Points….We have seen no beggars in the streets by night or day, but of other kinds of strollers plenty. Poverty, wretchedness, and vice are rife enough where we are going now.

This is the place—these narrow ways, diverging to the right and left, and reeking everywhere with, dirt and filth. Such lives as are led here bear the same fruits here as elsewhere. The coarse and bloated faces at the doors have counterparts at home and all the wide world over. Debauchery has made the very houses prematurely old. See how the rotten beams are tumbling down, and how the patched and broken windows seem to scowl dimly, like eyes that have been hurt in drunken frays. Many of those pigs live here. Do they ever wonder why their masters walk upright in lien of going on all-fours? And why they talk instead of grunting?

So far nearly every house is a low tavern, and on the bar-room walls are colored prints of Washington, and Queen Victoria of England, and the American eagle. Among the pigeon-holes that hold the bottles are pieces of plate-glass and colored paper, for there is, in some sort, a taste for decoration, even here….

The publication of American Notes at the end of 1842 shone a light on Five Points and many New Yorkers, who had never dared before to visit the area, were spurred by Dickens to go “slumming.” Indeed, Anbinder argues in Five Points that the term originated to describe visits to Five Points.

Dickens returned to New York in 1867 as part of a lecture tour. We will write about that trip in a future post.

Much more on Five Points can be found in our book, Inside the Apple, which comes out later this month. It can be pre-ordered now from Amazon.com or other online merchants.

Posted by Michelle and James Nevius at 4:00 AM