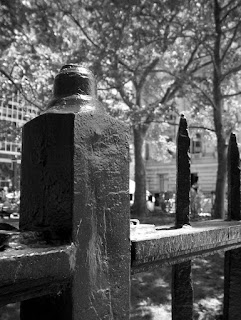 Yesterday, Sewell Chan blogged at the New York Times about the 276th birthday of Bowling Green, New York's first park. (The post includes a nifty 360-degree panorama of the park.)

As one commenter noted, the post mentioned the famous felling of the statue of George III on July 9, 1776, but not the subsequent removal of the finials from the park's wrought-iron fence.

This is a topic we deal with in Inside the Apple, where we note:

The fence that surrounds the Bowling Green today is the original one erected ca. 1771. It is a New York City Landmark and one of the city’s most significant pieces of pre-Revolutionary architecture. If you walk around the outside of the park, you can easily see that the larger fence posts are uneven and that each is rough-hewn in a slightly different way. It is clear that there were once decorative objects at the top of the fence posts, but it remains a mystery what these finials actually looked like, or when they were removed.

Perhaps one will turn up someday and we’ll see exactly what they looked like. Until then, it’s worth a visit to Bowling Green to see—and feel—this reminder of the American Revolution.

Inside the Apple comes out in less than two weeks. You can order your copy from an online merchant or ask about it at your local bookstore.

Posted by Michelle and James Nevius at 3:48 PM

Looking forward to your book!
We still talk about your wonderful walking tour!
I just told a friend about the Fence around Bowling Green Park.
Best Wishes from Oregon!