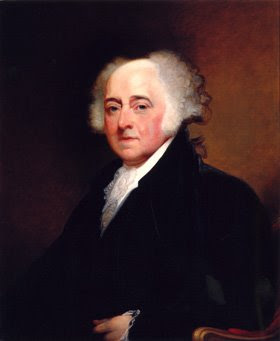 As we approach the Fourth of July weekend, we thought it might be a good opportunity to remember that America actually declared its independence from Great Britain today, July 2nd.
As John Adams wrote in a letter the next day to his wife, Abigail:
"The second day of July, 1776, will be the most memorable epoch in the history of America. I am apt to believe that it will be celebrated by succeeding generations as the great anniversary festival."
Well, he was only off by two days. In fact, only twleve of the thirteen original colonies had voted to declare independence on July 2 -- the delegates from the thirteenth colony, New York, did not feel they had been invested with such power and retreated from Philadelphia to discuss their options.
Meanwhile, on July 4, the Continental Congress agreed to print the Declaration. Scholars guess that somewhere between 100 and 200 of these Dunlap Broadsides, as they've come to be known, were printed that evening*, probably under the watchful eye of Thomas Jefferson, the Declaration's lead author. On July 5 and 6, John Hancock had riders dispatch Dunlap broadsides to colonial cities and on July 9 a copy arrived in New York City, where George Washington's troops were stationed.
That same day, New York agreed to be the thirteenth and final colony to declare independence. (Good thing, since the printed Declaration begins, "The unanimous declaration of the thirteen united states of America.") That night, American troops and the Sons of Liberty tore down the gilded statue of George III in Bowling Green Park, signaling New York's new life as an independent American city.
So, what all this really means is that the we shouldn't celebrate Independence Day, but rather Independence Week from July 2 - July 9. Have fun!
* 25 Dunlap Broadsides are known to exist today.
* * *
Much more about New York's role in the Revolution can be found in
Inside the Apple: A Streetwise History of New York City.

Posted by Michelle and James Nevius at 10:43 AM