The Downfall of William "Boss" Tweed 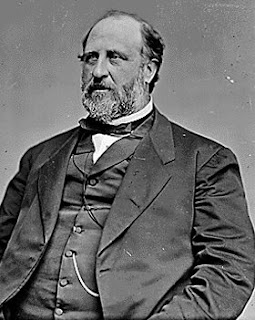 Today marks the anniversary of the beginning of the end of the notorious Tweed Ring and its leader, Tammany Hall boss William M. Tweed.
On July 8, 1871, the New York Times led with a story headlined "MORE RING VILLIANY." While this wasn't the first time the paper had railed against Tweed and Tammany politics, it was the first time they were able to back up their allegations with proof.
Tweed is still one of the best-known names from 19th-century New York; but as we note in Inside the Apple: A Streetwise History of New York City, his actual period in power was relatively brief. Though he served as an alderman and member of the U.S. congress in the 1850s, Tweed's stranglehold on New York politics really began in the aftermath of the Civil War Draft Riots of 1863 (a topic we'll tackle in another post). Over the next decade, Tweed turned New York into his own personal cash register, skimming money from building projects and, as the Times article points out, collecting exorbitant rents for National Guard armories--some of which didn't even exist.
The article's subhead laid out the basic details: "Exorbitant prices given for regimental headquarters--stable lofts at a premium--thousands of dollars paid for bare walls and unoccupied rooms. Over eighty percent of the money stolen." 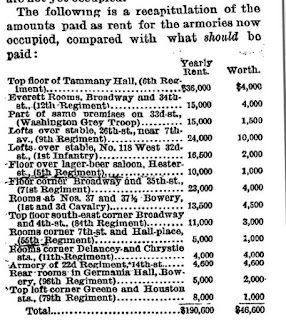 Over the course of the next two pages, the article spells out precisely how Tweed and his cronies were bilking the city. The Sixth Regiment, for example, rented an almost unusably small drill hall on the second floor of Tammany Hall's headquarters. While the Times notes that such a space might fetch $3,000 on the open market, the treasurer of Tammany Hall instead was paid by the city $86,000 a year--the assumption being that the money then wended its way into the pockets of Tammany Hall's leader, Tweed.
Another armory, at 53 Chrystie Street, was being rented for the more reasonable sum of $5,000 a year. The only problem--there was no armory at 53 Chrystie Street, just the rear entrance to a store owned by Tweed's business partner James H. Ingersoll. Indeed, a thorough examination of the books showed that most of the rents paid out by the city somehow ended up in Ingersoll's account. 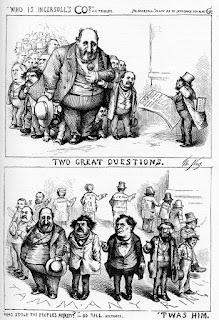 For the next three months, the Times -- and Harper's Weekly cartoonist Thomas Nast -- pursued Tweed relentlessly. He was arrested in October 1871 and put on trial in 1873. He was convicted, sent to prison, released, re-imprisoned, escaped.... well, it's a long story. We'll blog more about it future posts and you can, of course, read all about it in Inside the Apple.
* * * 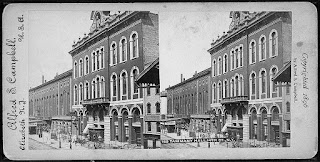 Though there is still a Tammany Hall headquarters building on Union Square, it isn't the one where Boss Tweed presided (or that rented out space to the Sixth Regiment), pictured above.
The best place to go and see Tweed's legacy is the Tweed Courthouse on Chambers Street between Centre Street and Broadway. Today the headquarters of the Board of Education, the Tweed Courthouse was one of the most expensive buildings constructed in 19th-century New York.
* * *

Posted by Michelle and James Nevius at 3:00 AM

This history is fascinating. I work at a drug rehab and a patient here claims to be part of the Tweed bloodline. I'm about to do some serious investigative work. Nonetheless, these articles are excellent and very interesting.