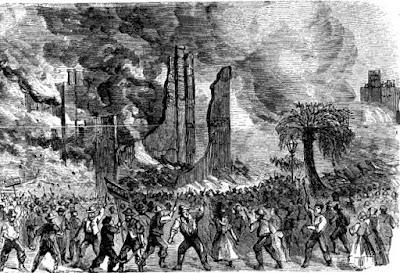 Today marks the anniversary of the beginning of the deadliest civil disturbance in American history: the Civil War Draft riots, which gripped the city from July 13 to 17, 1863.
We devote a chapter in Inside the Apple: A Streetwise History of New York City to summarizing the riots, but thought we'd post a small entry each of the next few days highlighting just how terrifying the riots were. The text we quote below is from Joel Tyler Headley's Great Riots of New York, 1712-1873, one of the first attempts by a historian to process and explain what had happened in the city during those few days. (The book is an excellent account of the riots, but is strongly biased toward the police--to whom it is dedicated--and against the "low" Irish, as Headley calls them.)
As the name implies, the riots broke out over the Union's decision to institute a draft. Desperate for both soldiers and money, the government decided on a two-pronged approach: those whose names were called could either choose to serve or they could get out of service by paying $300 for a substitute. Instantly people began to complain that the Civil War had turned into a "rich man's war and a poor man's fight," and as the July date of the draft approached, those New Yorkers who could little afford to pay $300--for some people that was a year's salary--talked about taking matters into their own hands.
The draft actually began on July 11, a Saturday, and proceeded calmly. As we write in Inside the Apple:

On Saturday, July 11, the first names were picked and a little more than half of New York’s 2,000-man quota was filled without incident. But over the weekend Peter Masterson, leader of Fire Engine Company 33, decided the best way to make sure his men didn’t get called was to burn down the draft office, thus destroying any record of who was in the draft census. Word spread throughout the city of a planned confrontation at the draft board’s offices at the Provost Marshall’s office on at . (This location had originally been picked because it was on the fringes of the city and thus was supposed to attract less notice.)

J.T. Headley then picks up the story:

Early in the morning men began to assemble here in separate groups, as if in accordance with a previous arrangement, and at last moved quietly north along the various avenues. Women, also, like camp followers, took the same direction in crowds. They were thus divided into separate gangs…armed with sticks, and clubs, and every conceivable weapon they could lay hands on, they moved north towards some point which had evidently been selected as a place of rendezvous. This proved to be a vacant lot near Central Park, and soon the living streams began to flow into it, and a more wild, savage, and heterogeneous-looking mass could not be imagined.

After a short consultation they again took up the line of march, and in two separate bodies, moved down Fifth and Sixth Avenues, until they reached Forty-sixth and Forty-seventh Streets, when they turned directly east.

The number composing this first mob has been so differently estimated, that it would be impossible from reports merely, to approximate the truth. A pretty accurate idea, however, can be gained of its immense size, from a statement made by Mr. King, son of President King, of Columbia College. Struck by its magnitude, he had the curiosity to get some estimate of it by timing its progress, and he found that although it filled the broad street from curbstone to curbstone, and was moving rapidly, it took between twenty and twenty-five minutes for it to pass a single point.

A ragged, coatless, heterogeneously weaponed army, it heaved tumultuously along toward Third Avenue. Tearing down the telegraph poles as it crossed the Harlem & New Haven Railroad track, it surged angrily up around the building where the drafting was going on. The small squad of police stationed there to repress disorder looked on bewildered, feeling they were powerless in the presence of such a host. Soon a stone went crashing through a window, which was the signal for a general assault on the doors. These giving way before the immense pressure, the foremost rushed in, followed by shouts and yells from those behind, and began to break up the furniture. The drafting officers, in an adjoining room, alarmed, fled precipitately through the rear of the building. The mob seized the wheel in which were the names, and what books, papers, and lists were left, and tore them up, and scattered them in every direction. A safe stood on one side, which was supposed to contain important papers, and on this they fell with clubs and stones, but in vain. Enraged at being thwarted, they set fire to the building, and hurried out of it. As the smoke began to ascend, the onlooking multitude without sent up a loud cheer. Though the upper part of the building was occupied by families, the rioters, thinking that the officers were concealed there, rained stones and brick-bats against the windows, sending terror into the hearts of the inmates.

As the day progressed, the mob grew in size and factions fanned out across the city. In bloody conflicts with the police, numerous officers were wounded including Police Superintendent Kennedy who was beaten and left for dead. Another target was the homes of wealthy Republicans and a string of houses along Lexington Avenue were set on fire and looted. 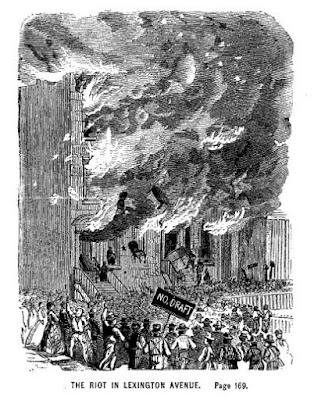 But the worst action of the day came at the Colored Orphan Asylum on Fifth Avenue at 43rd Street. Headley writes:

[I]mpelled by a strange logic, [the rioters] sought to destroy the Colored Orphan Asylum…. There would have been no draft but for the war—there would have been no war but for slavery. But the slaves were black, ergo, all blacks are responsible for the war. This seemed to be the logic of the mob, and having reached the sage conclusion to which it conducted, they did not stop to consider how poor helpless orphans could be held responsible, but proceeded at once to wreak their vengeance on them. The building was four stories high, and besides the matrons and officers, contained over two hundred children, from mere infants up to twelve years of age. Around this building the rioters gathered with loud cries and oaths, sending terror into the hearts of the inmates. Superintendent William E. Davis hurriedly fastened the doors; but knowing they would furnish but a momentary resistance to the armed multitude, he, with others, collected hastily the terrified children, and carrying some in their arms, and leading others, hurried them in a confused crowd out at the rear of the building, just as the ruffians effected an entrance in front. Then the work of pillage commenced, and everything carried off that could be, even to the dresses and trinkets of the children, while heavy furniture was smashed and chopped up in the blind desire of destruction. Not satisfied with this, they piled the fragments in the different rooms, and set fire to them.

The orphanage was burned around 4:00 p.m., about the same time that another group decided to attack the home of Mayor Opdyke and as a third group began heading toward Newspaper Row (today's Park Row) to take out their vengeance on Republican newspapers like Horace Greeley's Tribune.

But that's where we'll continue the story tomorrow.

Posted by Michelle and James Nevius at 1:41 PM