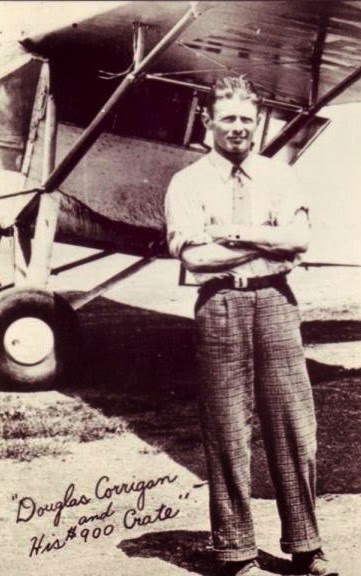 On July 17, 1938, Douglas Corrigan took off from Floyd Bennett Field in Brooklyn. He'd filed a flight plan intending to fly west to Long Beach, California (from which he'd arrived a week earlier). Instead, Corrigan flew east and, supposedly due to a faulty compass and thick fog, found himself 26 hours into the flight approaching Ireland instead of Long Beach. The stunt earned him the nickname "Wrong Way" Corrigan and a place in history.

To this day, it is unknown if Corrigan made the transatlantic flight by mistake or if he had been planning to pull the stunt for some time. In 1935, he'd been denied an application to fly to Ireland because his Curtiss Robin OX-5 plane was deemed unsound. A skilled mechanic, he had made numerous modifications to the aircraft (the $900 he spent in upgrades is what is referenced in today's postcard), but still his application to file a transatlantic flight plan was turned down. Eventually, Corrigan made so many custom changes to the Robin that it was deemed unsafe for flight.

Finally, on July 9, 1938, Corrigan flew from Long Beach to Brooklyn, his flight hampered only by a small fuel leak. Upon arriving at Floyd Bennett Field, Corrigan decided against repairing the leak, but instead filed a flight plan to return to California. He took off the morning of July 17 and flew 28 hours, 13 minutes, to the Baldonnel Aerodrome in Ireland, becoming an instant celebrity. Upon his return to New York (via steamship) he was feted with a ticker-tape parade. His autobiography was an instant best-seller and he was soon shilling for all sorts of "Wrong Way" products. His story became the film The Flying Irishman in 1939.

Despite mounting evidence that Corrigan had purposefully flown to Ireland, he maintained until the end of his life that it was a simple navigational error.