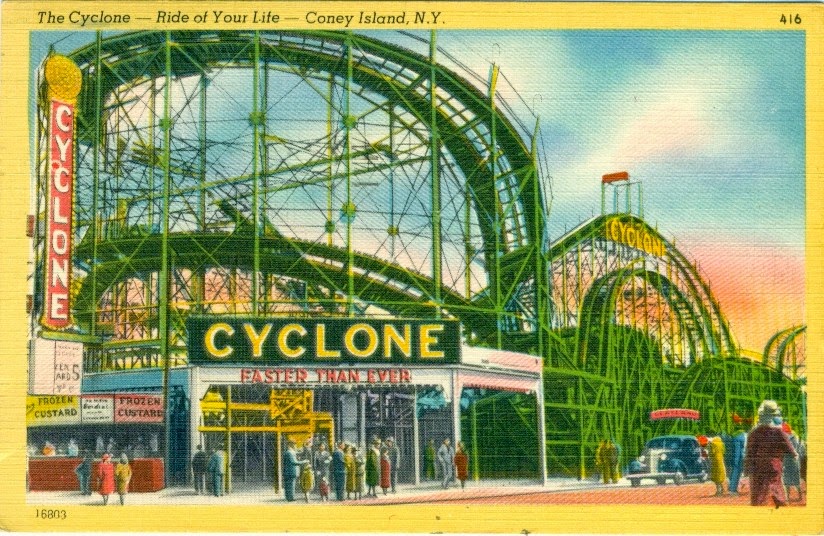 Fans of wooden roller coasters probably already know that today is the 87th birthday of the Cyclone, which opened on June 26, 1927, and is still going strong.

However, the history of roller coasters at Coney Island is much older than the Cyclone; in fact, America's first roller coaster, the Gravity Pleasure Switchback Railway, opened on June 6, 1884, at an amusement park just off the boardwalk.

The switchback was the brainchild of LaMarcus A. Thompson. Visitors would climb to the top of a tower and board a car that then dropped six hundred feet over an undulating track. At the far end the car would be "switched back" to another track and returned to the tower. Thompson envisioned his ride as wholesome family entertainment -- in a period when amusement parks were often seen as dens of sin and iniquity -- and the cars, traveling at an "invigorating" six miles per hour, provided great views of the Coney Island beach and boardwalk. He charged 5 cents a ride and made back the $1600 he'd invested in the roller coaster in less than three weeks.

It is unclear how long the Switchback Railway lasted at Coney Island (or even precisely where it stood). Despite its early success, Thompson soon faced a host of competitors and his original coaster may only have stood for three years.

By the 1920s, roller coasters were all the rage at Coney Island, and the Cyclone was just one among a number of rides with names like the Tornado and the Thunderbolt. This season, a new Thunderbolt--with a precipitous drop--has been added to Luna Park:

Don't forget that this Sunday, June 29, at 4:00pm, we wil be at WORD Bookstore in Greenpoint for a talk and walking tour. Details: http://wordbookstores.com/event/bk-footprints-new-york-james-and-michelle-nevius

* * * *
Read more about Coney Island in
Footprints in New York: Tracing the Lives of Four Centuries of New Yorkers

If you haven't had a chance to pick up a copy of Footprints yet, you can order it from independent bookstores across the country

Posted by Michelle and James Nevius at 10:15 AM