There's a story in the newly revamped Gothamist/WNYC today about the efforts to have Walt Whitman's sole remaining New York City home landmarked. 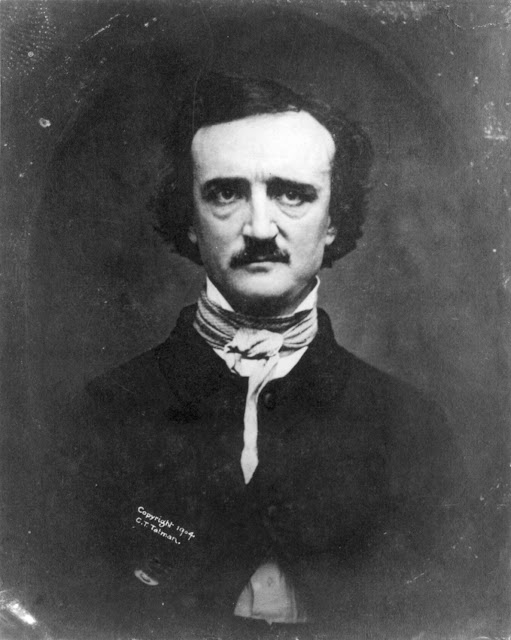 This brings to mind the similar efforts to save Edgar Allan Poe's only Manhattan home, a townhouse at 85 Amity Street (today's West 3rd Street) in Greenwich Village. Today that same block houses the Poe Study Center, but that building isn't Poe's original home.


The Poes lived nine places in the city, seven of them in just a two-year period.... Having published “The Raven” in the New York Evening Mirror in January 1845, Poe set to work at 85 Amity Street revising the poem for The Raven and Other Poems, published that November. He also began his series “Literati of New York City” while residing at 85 Amity, and may have written the bulk of “The Cask of Amontillado” at the boardinghouse too.

By the dawn of the twenty-first century this was the only Poe home in Manhattan still standing. With that in mind, it’s logical to assume it would have merited at least some consideration by the Landmarks Preservation Commission. But in 2000, the commission declined to even hold a hearing. On one hand, this seemed ironic—back in 1969, when creating the Greenwich Village Historic District, the commissioners cited Poe as one of the literary figures whose residence made the neighborhood historically important. Yet, at that time, they had not extended the landmark district’s boundaries the one block necessary to include the Poe house. Three decades later, the commission was not going to raise NYU’s considerably powerful ire by revisiting that decision. Not everyone agreed that the house was worth saving. Kenneth Silverman, a Poe scholar employed by NYU, pointed out that the building had been so significantly altered since 1845 that Poe wouldn’t even recognize it as his own home. He had a point: The stoop had been removed, and the lower floors turned into commercial space. Arched window frames replaced the Greek Revival originals; an incongruous tiled awning jutted out between the second and third stories.


What’s more maddening than the Landmarks Preservation Commission’s decision—or, more accurately, their abdication from making a decision—is what NYU did next. In an eleventh-hour move to placate the community, they agreed to rebuild the facade of Poe’s house as part of the new building, install the home’s staircase inside, and provide a room for Poe readings and events. No one was ecstatic about this, but it was better than nothing.

Instead, what people got was worse than nothing. The scaffolding came down...in October 2003 to reveal an ersatz Poe home. Nothing had been preserved; nothing had been rebuilt. It wasn’t even in the right spot.

If what happened to Poe house happens to Walt Whitman's Brooklyn home, we may find in the future that the original structure has been torn down and some simulacrum put in its place to note the historic importance of the spot. Is this sort of commemoration useful or necessary? That's a deeper question that preservationists and historians have been grappling with for centuries.