Postcard Thursday: The Great Fire of 1845

New Street is one of the most forlorn thoroughfares in the Financial District. Set between Broadway and Broad Street, it essentially acts as an alley today, cordoned off to most vehicles because of its proximity to the New York Stock Exchange.

However, in the 19th century it was still a bustling commercial street, and around 2:30 a.m. on the night of July 19, 1845, a fire started at the offices of JL Van Doren who was an oil merchant and candle manufacturer. 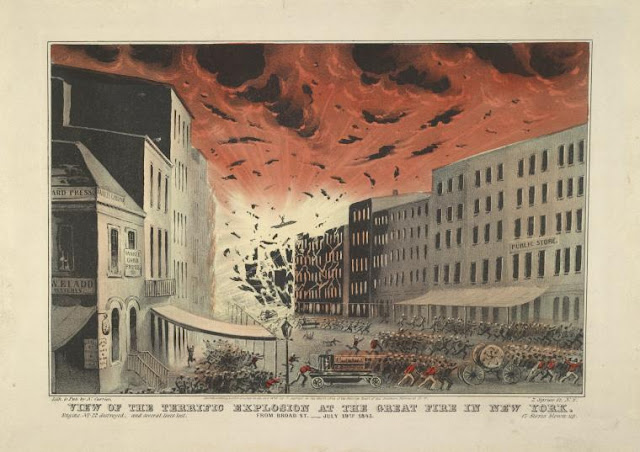 The fire spread quickly, and about two hours later reached the warehouse of Crocker and Warren, "in which was stored a very large quantity of saltpetre" (potassium nitrate), which is a component of gunpowder. Rumors swirled at the time that actual gunpowder was also stored on the premises, but those were never proven, in part because of the total destruction of the building.

Unlike the Great Fire of 1835, which burned over 700 buildings in the same neighborhood, the fire of 1845 was contained relatively quickly. This was, in part, because New York City had completed the Croton Aqueduct, which brought reliable running water to the city for first time.


The system was built following ancient Roman principles, with water descending by gravity from the Croton River dam, 40 miles north of the city in Westchester County, in elevated iron pipe. The city had two large reservoirs: the Receiving Reservoir, where Central Park’s Great Lawn now stands and a Distribution Reservoir on 42nd Street, future home to the New York Public Library. The system came to a grand, ceremonial terminus in City Hall Park at the Croton Fountain, the first fountain the city had ever been able to build that sprayed jets of water throughout the day.... Despite the city’s grave need for water for basic human consumption, what actually convinced the public that an aqueduct system was needed was the Great Fire of 1835, which had destroyed most of the old city. Thus [on opening day], New Yorkers weren’t just celebrating their ability to drink a clean cup of water—they were glad that the next time fire struck, the volunteer firemen would be able to vanquish it quickly.

However, while the number of buildings destroyed was minimized, this fire did kill 30 people, making it the deadliest of New York's "great" fires.

Posted by Michelle and James Nevius at 1:35 PM