Postcard Thursday: The Great Fire of 1835 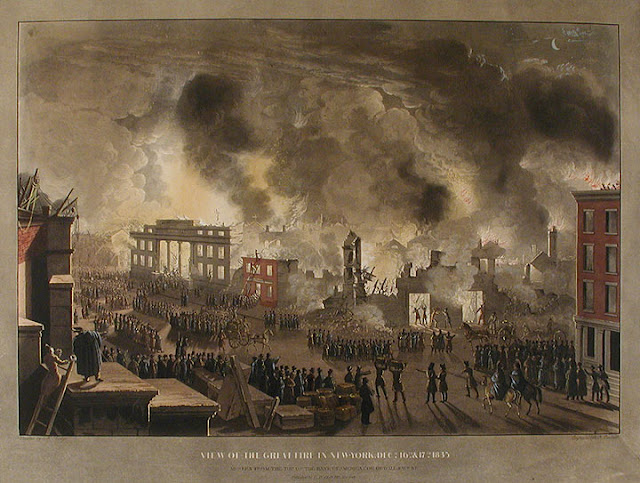 The image in today's postcard (which is actually a commemorative print) depicts an event that took place over three days, December 16-18, 1835. So, technically, Postcard Thursday isn't one day late.

This year marks the 180th anniversary of the Great Fire of 1835, the most devastating fire in the Western Hemisphere since London's near-total destruction in 1666.


On the night of December 16, 1835, a gas line broke in a dry goods store near Hanover Square in the Financial District; the gas, ignited by a coal stove, caused the store to explode and the ensuing fire quickly fanned southward along Stone Street and northeast toward Wall Street. Not only was it the worst fire in New York’s history, it wiped away almost all of the remaining traces of the old Dutch and British colonial city.

New York had some of the nation’s strictest fire codes; buildings were never erected with common walls, and brick and stone were favored over cheaper wood (though this was as much about status as safety). Every home was required to have a leather fire bucket affixed to a hook by the door and every business had to have at least two. At the sound of the first alarm, the city’s volunteer fire companies turned out in force. As per instructions, every fire bucket was made ready, and bucket brigades formed to nearby wells and cisterns. Unfortunately, it had been so cold for so many nights that the wells were frozen solid.

When the firefighters changed tack and headed for the East River instead, they found to their chagrin that the river was frozen, too. With no other source of running water, they were forced to improvise. At the ends of the piers, holes were hacked in the ice and fire engines lowered down to pump water. However, by the time they were able to get any water flowing, the hoses had frozen, and when they did manage to get water up, most of it was blown back as frozen ice into the faces of the firemen. In some places, the only way to stop the fire’s spread was to blow up buildings in its path to create a makeshift firebreak. 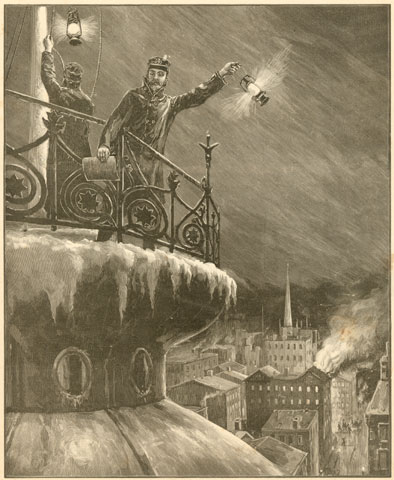 Mayor Philip Hone, one of the great diarists of New York in the 19th century, wrote:

“December 17—How shall I record the events of last night, or how attempt to describe the most awful calamity which has ever visited these United States? The greatest loss by fire that has ever been known…. I am fatigued in body, disturbed in mind, and my fancy filled with images of horror which my pen is inadequate to describe.”

In the end, the fire had to burn itself out and, in the process, it destroyed much of the area between Broadway and Pearl Street in the financial district. If you happen to be down in that neighborhood, take a walk down the block of Stone Street that connects Hanover Square to Coenties Slip. This is the area known today for its string of restaurants and pubs; the buildings themselves, however, form a sort of memorial to the fire. Almost all of them were built within a 12-month period in 1836-37 to replace countinghouses and warehouses destroyed in the Great Fire. Notice how many of the buildings have extra wide doors (to haul in cargo) and strong, granite curbs to keep goods from accidentally plunging in to the basement.


There are supposedly no other, official memorials to the Great Fire, despite the fact that it was the largest urban fire since London’s Great Fire in 1661. But when we were writing Inside the Apple, we found one. During the worst of the fire,

a valiant attempt was made to rescue a 15-foot statue of Alexander Hamilton from the floor of the exchange, but just as the statue reached the doorway the roof collapsed, destroying it. The statue, by Robert Ball Hughes, was the first marble statue created in the United States and had only been installed eight months earlier. Though it took 45 years, the statue was ultimately replaced by Hamilton’s youngest son, John C. Hamilton, and it stands in Central Park behind the Metropolitan Museum of Art. This statue in the park is remarkable in that it is made entirely of granite—not the easiest stone to carve—and it has long been thought that John C. Hamilton commissioned the work out of this durable stone so that no matter what calamities might befall Central Park, his father’s statue would endure.

Available from your favorite online retailers (Amazon, Barnes and Noble, etc.) or from independent bookstores across the country.
Posted by Michelle and James Nevius at 10:09 AM