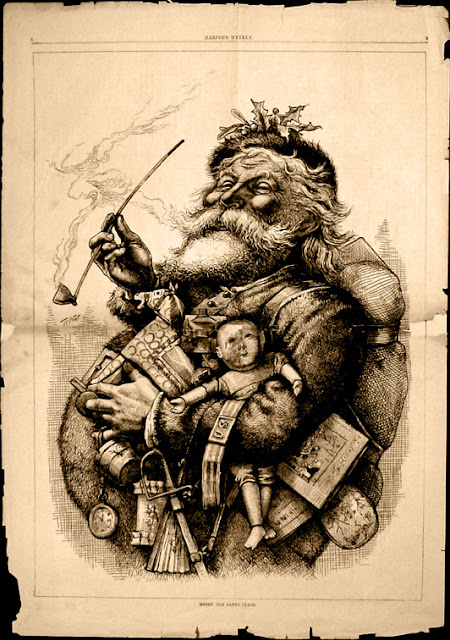 Those immortal words, first published anonymously in the Troy Sentinel in 1823, have become a central part of the American Christmas story. They were penned by Clement Clarke Moore, a prominent New Yorker, and together with Thomas Nast's depictions of Santa later in the century (such as the 1881 version above) helped shaped our modern ideas of Santa Claus.

We write about both men in Footprints in New York and Inside the Apple, though in neither case about their contributions to Christmas.

Moore was a major landowner and important to the growth of both Greenwich Village and Chelsea. As we write in Footprints:

Moore is also the person responsible for building the Church of St. Luke in the Fields in Greenwich Village.


Even for someone of Moore’s social station and wealth, commuting from Chelsea to [go to church all the way down in] the city was difficult. The best route was via the Hudson River by sloop, but this wasn’t always possible or practical. Overland, there were two options: the longer route via the Albany Post Road on the east side of the island, which connected to the Bowery and then to Lower Broadway or the shorter “Road to Greenwich,” which ran up the Hudson side of the island to the vicinity of 14th Street. However, this road (today called Greenwich Street), was so close to the river—and had to go through at least one swamp—that it was rutted, muddy, and frequently impassable.

Moore’s solution to this quandary was to ally with residents of the nearby village of Greenwich and convince Trinity Church to sell off part of the northern section of their land so that an independent Episcopal church could be established. The cornerstone for the church was laid in 1821 at a site on the corner of Hudson and Burrows [now Grove] Streets. The name of St. Luke, the healing evangelist, was chosen to reflect Greenwich’s role as a place of refuge for New Yorkers during summer outbreaks of yellow fever and other pestilence. Due to its rural location, the parish was soon dubbed St. Luke in the Fields and it became the center of religious life for the residents of Greenwich, Chelsea, and other outlying areas.

In fact, the donkey had an association with the party dating back to President Andrew Jackson, who had been openly called a jackass by his opponents. But it was Nast's ongoing use of the symbol in the 1870s that brought it lasting popularity. In 1874, he introduced the elephant as his representation of the Republicans, minting the symbols that the parties still use to this day. 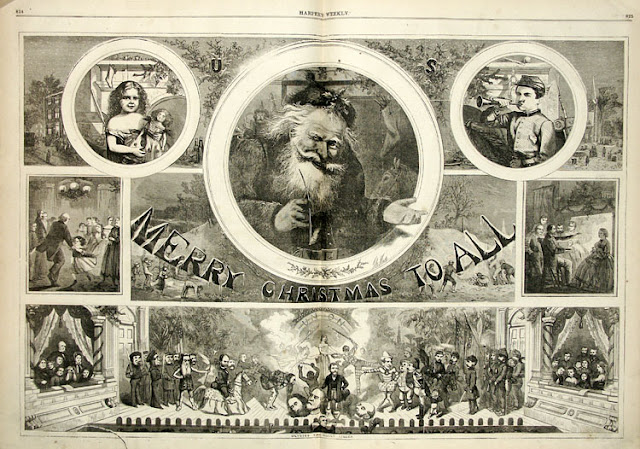 But despite Nast's pointed political statements, he had a soft spot for the holidays. Beginning in 1863, he would draw pictures of Santa Claus or families celebrating together for Harper's, culminating in 1881 with the image at the top of this post, which is still seen by many as the iconic depiction of St. Nick.

Have a safe and happy holiday!
Michelle & James

Posted by Michelle and James Nevius at 11:56 AM