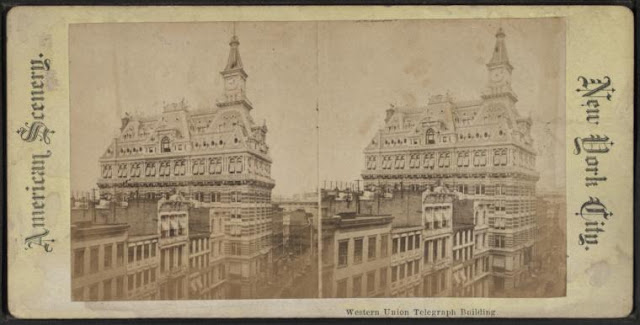 Tonight, it is estimated that more than 1 billion people around the world will watch the illuminated ball drop in Times Square to ring in the new year. This New Year’s tradition in Times Square dates back to 1907—the dropping ball replaced an earlier fireworks display—but the notion of dropping a ball as a way of keeping time is a much older tradition.

In 1877, a ball was added to the top of the Western Union Building on Lower Broadway. (We couldn't find a postcard of this building in our collection; the above stereo slide from the Library of Congress will have to do.) Each day at noon, a telegraph signal from Western Union’s main office in Washington, DC, would trip a switch in New York and the ball would descend from the flagpole. Visible throughout the Financial District—and, more importantly, from all the ships in the harbor—it allowed people to reset their watches and ship chronometers. For the first time, New York ran on a standard time.

As the New York Times noted in 1877, this idea of a ball dropping to keep the time wasn’t new. For many years prior to the Civil War, the New York custom house had signaled the time with a ball drop, and in the 1870s it was common to find time balls in major European ports. However, when it began operation in April 1877, the Western Union ball was the only one in a North American port and quickly became a fixture of the Manhattan skyline.

Western Union, afraid that the time ball wasn’t always going to work, set up a system whereby a red flag would be flown from 12:01 to 12:10 p.m. on days that the ball refused to drop. Further, information would be sent to the press each day informing them whether the ball actually dropped at noon or had fallen at the wrong time!

When the Times ushered in New Year's from their brand-new skyscraper in Times Square in 1904, they did so with fireworks shot from the building's rooftop. However, the police soon began to fear that fireworks might be a hazard in the rapidly developing neighborhood. 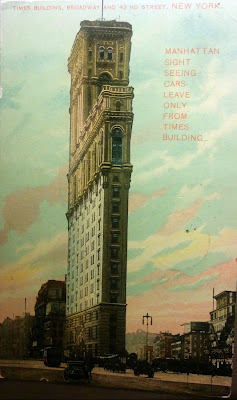 Instead, in 1907, the Times adopted the time ball as their symbol for ushering in the new year and placed a giant ball atop their skyscraper. That original Times Square ball, made of iron and wood and lit by 25 incandescent lights, weighed 700 pounds. We've been dropping a ball from the top of that building ever since. The current time ball, lit by energy-efficient LED diodes, now stays atop the old Times Building year round so that everyone who visits New York can see the actual ball that drops on New Year’s Eve.

[This article was adopted from an earlier post from 2009.]
Posted by Michelle and James Nevius at 10:58 AM