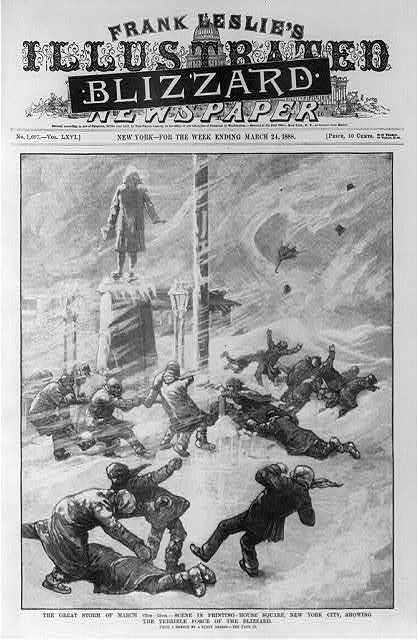 Are you sick of winter yet?

Today marks the 125th anniversary of the famous Blizzard of 1888, which struck the east coast on March 11, moving northward rapidly. Snow began to fall in earnest in New York on March 12 and by the time it was over--three days later--over 40 inches of snow had been dumped on the city. 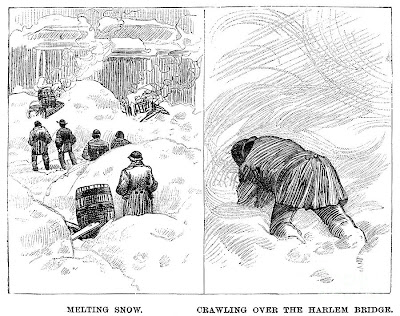 By the end of the first day, the city had been brought to a standstill and the city’s miles of telegraph and telephone wires lay in downed heaps along the sides of the roads. (Though New York had already toyed with idea of burying these wires underground, it was the 1888 blizzard that finally forced the city to act, freeing the city of above-ground wires to this day.) Because of snow drifts across the tracks, rail service was suspended in and out of the city for over a week and staples such as bread and coal were quickly in short supply. In some places (such as the Gravesend section of Brooklyn), snow drifts were as high as 52 feet.

By far the most famous victim of the storm was New York Senator Roscoe Conkling. An important post-Civil War Republican, Conkling was part of the Stalwart branch of the party that hoped to draft Ulysses S. Grant into running for a third term. When that didn’t happen, Conkling supported Rutherford B. Hayes and was instrumental in creating the commission that ultimately handed Hayes the presidency in 1877. (The controversy of the 1876 Hayes/Tilden election will be the subject of a future post.)

Conkling’s best-known protégé was Chester A. Arthur, who benefited from Conkling’s patronage when he was New York’s Commissioner of Customs, but as president instituted civil service reforms that enraged his former mentor.


On the first day of the blizzard, Conking was at his law office at 10 Wall Street. Despite the severity of the storm—which made catching a horse-drawn cab impossible—Conkling decided to walk from his office to his club on Madison Square, even though it was 6:00 PM and already dark. He made it up Broadway as far as Union Square where he (as he later put it): “got to the middle of the park and was up to my arms in a drift…. For nearly twenty minutes I was stuck there and I came as near giving right up and sinking down there to die as a man can and not do it.”

But somehow Conkling freed himself and continued up Broadway to Madison Square, where the people at the New York Club could “scarcely believe” he had walked from Wall Street.
However, while Conkling was quick to credit his three-hour walk to his strong constitution, all was not well. He soon developed an ear infection, which in turn became mastoiditis, and by April doctors were draining pus from his skull. He died on April 18, 1888, about a month after the blizzard.

Conkling is memorialized in a statue in Madison Square Park. (Apparently the city fathers balked at commemorating Conkling in Union Square amidst George Washington and Abraham Lincoln.)

Want to know more about NYC history? Check out
Inside the Apple: A Streetwise History of New York City.

Posted by Michelle and James Nevius at 11:38 AM