Postcard Thursday: The End of Slavery in New York 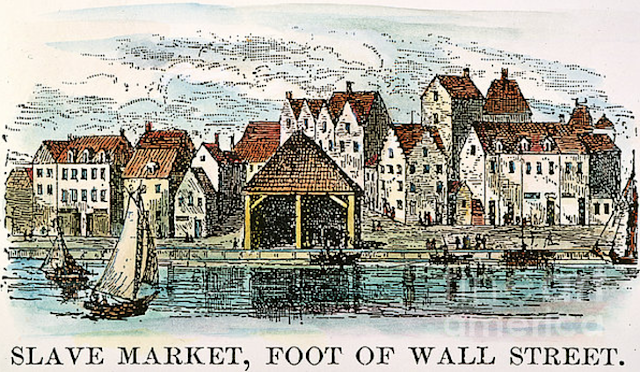 It is easy in modern New York to forget that New York's economic strength from the seventeenth-nineteenth century was tied to the slavery. In the mid-1800s, forty percent of white families in the city owned at least one enslaved person, and the city's Meal Market on Wall Street did a brisk trade in the selling of humans as chattel.

As we write in Inside the Apple*:


Slavery had been a contentious issue through America’s brief history as a nation, in no place more than New York. By the turn of the 19th century, it had become the largest slave-holding city in the north—and the nation’s second-largest slave-holding city, after Charleston, South Carolina. New York’s Manumission Society, whose founders included John Jay and Alexander Hamilton, was instrumental in banning the sale of enslaved Africans in the state and instituting a gradual manumission beginning in 1799. However, by 1817, slavery was still abundant and Governor Daniel Tompkins prompted the state legislature to set a date for total emancipation. The date selected—a decade away—was July 4, 1827, when all slaves in the state were freed.

Because African-American leaders felt that the celebrations of emancipation would get lost amidst the general hubbub of Independence Day, they decided to mark manumission with a parade on July 5, 1827. A group of nearly 4,000 marchers ("accompanied by several bands of music") headed down Broadway and ended at the AME Zion Church, which then stood at the corner of Church and Leonard streets. Other celebrations included a night at the Mount Pitt Circus on Grand Street, where a "Grand Celebration of the Abolition of Slavery" was held, including a performance of the melodrama The Secret Mine, which evidently combines elements of horsemanship, Hinduism, and a Chinese slave. Whether this was the most appropriate conclusion for the day's events is unclear.

Some New Yorkers were not emancipated at July 5; unscrupulous owners failed to inform some of those who'd been enslaved of their freedom.


The most famous New York State slave not to gain his freedom was Caesar, who died in 1852 as a “house servant” at Bethlehem House, the estate of the Nicoll family, descendants of New York’s first English Governor, Richard Nicolls (somewhere along the line, the final “s” was dropped from their surname). Caesar had been born in the house in 1737 and served his entire 115-year-life in service to three generations of the Nicoll family, totally unaware that after 1827 he was a free man. Caesar’s fate is only known because a later Nicoll descendant wrote up the story of his life. How many other Africans continued in enslavement or indentured servitude because their owners hid the truth from them?


* Did you know that Inside the Apple has recently been released for the first time as an audio book?