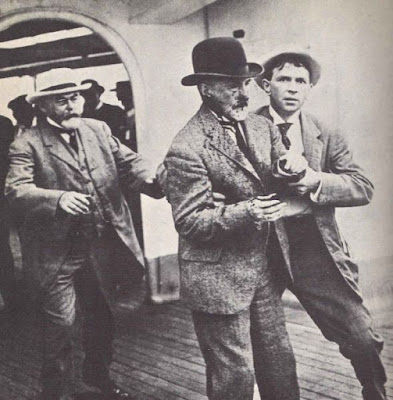 On August 9, 1910, the mayor of New York, William Jay Gaynor, posed for photos on the deck on the SS Kaiser Wilhelm der Grosse. He was about to embark on a vacation to Europe, and as he stood on deck he was approached by J.J. Gallagher, a former municipal dock worker who had been fired about a month earlier. Gallagher shot the mayor at close range--just as New York World photographer William Warnecke snapped the picture above. Gallagher was immediately subdued. When asked why he'd done it, Gallagher said simply: "He took away my bread and meat. I had to do it."

Mayor Gaynor, a native of the village of Oriskany in Oneida County, was best known as a jurist, having been appointed to State's Supreme Court in 1893 and the Appellate Division in 1905. Tammany Hall Democrats, disappointed by their two-term standard bearer, George B. "Max" McClellan, picked Gaynor to run in 1909. Gaynor handily defeated the Republic/Fusion candidate, Otto T. Bannard, in part because Republican votes were siphoned off by newspaper magnate William Randolph Hearst who ran as an independent.

Instead of appointing Tammany Hall cronies to fill vacancies at City Hall, however, Gaynor instituted broad-reaching civil service reforms and was a champion of extending the new IRT subway.

Though the bullet lodged in Mayor Gaynor's throat, he made a relatively speedy recovery. (Gallagher, meanwhile, was tried, found insane, and sent to an asylum in Trenton, New Jersey.)

In 1913, Gaynor received the backing of a reform coalition to run for a second term as mayor. (Tammany Hall wanted nothing more to do with him.) On September 3, he left for Europe on the SS Baltic and six days later, he died in a deck chair of a heart attack; it is unclear whether or not Gallagher's assassination attempt had weakened the mayor and contributed to his death. Gallagher was never tried with murder--he had died at the Trenton asylum a few months earlier. 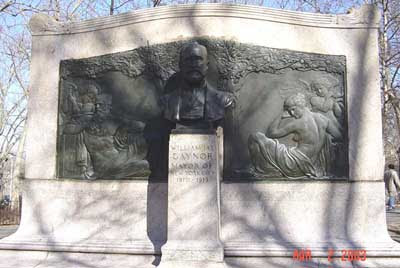 Posted by Michelle and James Nevius at 1:29 PM