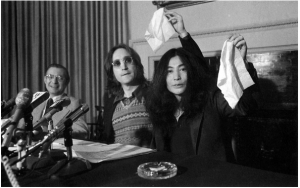 Yesterday, it was reported that the townhouse at 1 White Street in Tribeca, which sold three years ago for $3.25 million, is back on the market--gutted--for $4.25 million. The structure's claim to fame is that it was dubbed the "Nutopian Embassy" by John Lennon and Yoko Ono on April 1, 1973, when they declared themselves ambassadors of the newly formed "conceptual country" of Nutopia.

A week earlier, on March 23, Lennon had been given an order to leave the United States within 60 days. Though Yoko Ono had a green card from her earlier marriage, the American government refused to grant one to Lennon because of a marijuana conviction in the UK. Due to their "radical" politics, Lennon and Ono were also being hounded by the FBI, who followed them and tapped their phones. In an effort to bring attention to the ridiculousness of their plight, Lennon and Ono created Nutopia, declaring:

We announce the birth of a conceptual country, NUTOPIA.
Citizenship of the country can be obtained by declaration of your awareness of NUTOPIA.
NUTOPIA has no land, no boundaries, no passports, only people.
NUTOPIA has no laws other than cosmic.
All people of NUTOPIA are ambassadors of the country.
As two ambassadors of NUTOPIA, we ask for diplomatic immunity and recognition in the United Nations of our country and our people.

Why, exactly, they chose 1 White Street as the fictional Nutopian Embassy is unclear. They had no personal connection to the building. At the time, they were still living on Bank Street in Greenwich Village (they would soon move to the Dakota), about a twenty-five minute from White Street. Perhaps it was just a building they'd walked by. Or maybe they liked the symbolism of the street's name. The flag of Nutopia (pictured above) was simply a white handkerchief, which symbolized surrender.

As Lennon would write in the title track to Mind Games a few months later: "Love is surrender -- you got to let it go." Mind Games would also include the "Nutopian International Anthem" (a few seconds of silence at the end of side one) and the printed "Declaration of Nutopia" in the liner notes.

Yoko Ono noted on last year's anniversary of the birth of Nutopia:


Nutopia is a country that exists in all of us.
John and I created this imaginary world.
We called a press conference and produced a white handkerchief from our pockets
and said "This is a flag to Surrender to Peace."
Not Fight for Peace, but "Surrender" to Peace was the important bit.
All of us represent Nutopia.
On this day of the birth of Nutopia,
Let’s all wave the white flag or handkerchief in our minds
And say "I love all of me" and have lots of fun.
Because we deserve it.
Each one of us.

For many years, the former residents of 1 White Street received mail for Lennon and Ono, though it waned after Lennon's murder in 1980.


Read more about John Lennon in
Inside the Apple: A Streetwise History of New York City.

Posted by Michelle and James Nevius at 11:23 AM