The Wedding of General Tom Thumb and Lavinia Warren 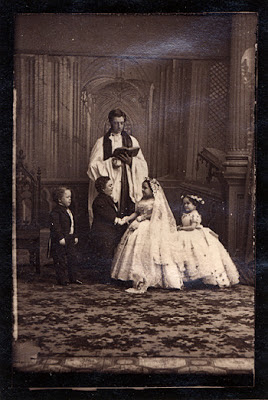 This weekend marks the 150th anniversary of the marriage of Charles S. Stratton -- known professionally as Gen. Tom Thumb -- and Lavinia Warren at Grace Church in Greenwich Village. Stratton was the most famous, and most famously exploited, little person in the nineteenth century, working for infamous showman P.T. Barnum from the age of five.

In 1842, Barnum reopened the refurbished American Museum on Broadway near St. Paul's Chapel. The museum housed a cavalcade of curiosities, natural phenomena, outright fakes, and people whose physical appearance fell outside the norm. The next year, Barnum first met Stratton, who had stopped growing at the age of six months at only twenty-five inches tall. Barnum convinced Stratton's parents to allow him to take over the boy's education, and soon Stratton was on stage in New York. Barnum invented a back story for the boy, telling people that he was eleven years old and had emigrated from Britain. He also dubbed Stratton "Tom Thumb" after a character from Grimm's fairy tales. (The name had been coopted a few years earlier for Peter Cooper's steam locomotive, and Barnum was surely hoping to hitch his performer to Cooper's successful use of the name.)

Stratton performed a song, dance, and comedy act written for him by -- and sometimes co-starring -- Barnum. Among Stratton's biggest hits were his impersonations of famous historical figures, including Napoleon Bonaparte. Soon the act went on tour, and Stratton was the toast of Europe, meeting Queen Victoria, and cementing Barnum's status as one of the greatest promoters in history.

In the early 1860s, Barnum hired another little person, Lavinia Warren (born Mercy Lavinia Warren Bump), who had been working as a performer on a Mississippi River boat. According to accounts at the time, when Stratton first laid eyes on Warren, it was love at first sight. Barnum encouraged the match, and on February 10, 1863, they were married at a ceremony at Grace Church. It was one of the biggest events of the season, and a bright spot for many New Yorkers during the depths of the Civil War.

Barnum, always on the make, managed the wedding to the smallest detail. His first choice was to have the ceremony take place at St. Paul's (due to its proximity to the American Museum), officiated by Episcopal Bishop Henry C. Potter. When Trinity parish nixed the idea, Barnum switched the venue to Grace, helping cement that church's reputation as the spot for high society's biggest functions.

Admission to the wedding was via an elaborate, multi-part (and therefore, presumably, not easily forged) ticket. A separate reception admission cost $75, a fortune for many people in 1863. According to some reports, over 15,000 people applied for tickets to attend the reception, which was held at the Metropolitan Hotel on Broadway. As the New York Times put it in their coverage of the nuptials, the burning question the next morning was "Did you or did you not see Tom Thumb married?"

The paper went on to note that


the Church was comfortably filled by an audience comprising representatives of each and every strata of New-York's respectable society. There were very many elegantly dressed ladies, and quite as many who paid but little respect either to the request of the inviter, the customary rules of etiquette, or the obvious proprieties of the occasion. It can hardly be considered the correct thing to newspaperize the presence of private individuals, however conspicuously placed or dressed, but the appearance of Maj.-Gen. BURNSIDE we may mention with propriety....

On their honeymoon, the Strattons went to the White House, where they were warmly received by Abraham Lincoln. They remained happily married for twenty years, until Charles died of a stroke in 1883. Lavinia remarried, and continued to perform into the twentieth century, appearing in early silent films.

After the wedding, pictures of the "the General and his wife" and the "Fairy Wedding" became popular collector's items. Churches began performing "Tom Thumb Weddings" as fundraisers, with children playing the roles of the wedding party. Indeed, this appears still to be happening today. Barnum, of course, found lasting fame as one of the founders of the modern circus, and his Ringling Bros. Barnum & Bailey production continues to this day.

Read more about PT Barnum and Grace Church in
Inside the Apple: A Streetwise History of New York City.


Posted by Michelle and James Nevius at 11:17 AM