Circus and the City at the Bard Graduate Center

You only have a few more weeks to catch the excellent show "Circus and the City: New York, 1793-2010" at the Bard Graduate Center. 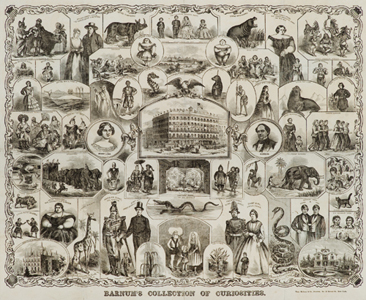 Using over 200 objects, the exhibition tells the story of the evolution of the modern circus from John Bill Ricketts's equestrian theater on Greenwich Street to the Ringling Brothers Barnum & Bailey spectaculars of today. Because so much of that evolution took place in New York, the show is filled with wonderful posters, paintings, and photographs of New York through the ages. Of particular interest are the sections dealing with P.T. Barnum. Today, Barnum's name is best known through the circus, but he was an impresario long before the modern circus was born and his American Museum near City Hall was one of the city's top attractions.

As the show's press release also notes, the "exhibition also features a series of thematic displays about parades, music, toys, elephants, posters, and other aspects of the circus business. These displays include wonderful prints and photographs of circuses parading through the city in different eras, as well as impressive wooden carvings by Samuel A. Robb, New York’s preeminent manufacturer of show and shop figures."

The exhibition runs through February 3, 2013, Tuesday-Sunday. Thursday nights the gallery stays open late and is free after 5pm.

Read more about PT Barnum in
Inside the Apple: A Streetwise History of New York City.

Posted by Michelle and James Nevius at 12:30 PM