The Fate of Beth Hamedrash Hagadol

If you don't regularly follow the news on the Lower East Side, you might not have seen that Congregation Beth Hamedrash Hagadol, who own the synagogue on Norfolk Street that we visit on tours and talk about in Inside the Apple, has formally requested that its landmark designation be revoked so that it can be torn down and replaced by a 45,000-square foot condo tower that would also include a small shul for the congregation.

The complete story is available at The Lo-Down (your best source for ongoing Lower East Side news), but it doesn't really talk about the factors that made this synagogue so important in the first place. Built in 1850, as the Norfolk Street Baptist Church, a plain-front Gothic Revival structure, this was one of the last vestiges of the area as an upper-middle-class, mostly Protestant neighborhood.

After the American Revolution, most of this land--which had been owned by the Delancey family, who were Tories--was seized by the government and sold off in lots. Because the Delanceys had already improved the area, it was ripe to become a suburban (when the city really stopped at Chambers Street) enclave. A few houses from this period still linger in the area, especially along East Broadway and Henry Street. 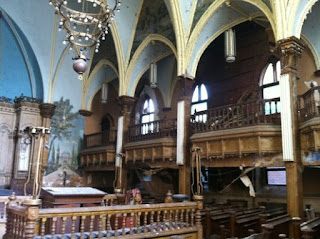 Within ten years, the middle-class Baptists had moved uptown (eventually becoming the basis for Riverside Church), and the building became a Methodist Episcopal parish before being sold to Beth Hamedrash in 1885. The new owners added a Jewish star to the roof and reconfigured the altar area to become a bima, but otherwise left the plain Gothic church intact.

The congregation’s controversial rabbi, Abraham Ash, died a couple of years after the move, prompting the search not only for a replacement, but for a man who might serve as Chief Rabbi for the Orthodox in New York. A Union of Congregations was formed to search for someone who could oversee kosher supervision, help enforce stricter observation of the Sabbath, and—perhaps most importantly—help organize a more permanent beth din (a rabbinical court) to adjudicate on religious matters. In 1888, the congregation hired Rabbi Jacob Joseph of Vilnius, Lithuania—apparently the only candidate who was interested in the job. Thousands showed up for his first sermon at Beth Hamedrash Hagadol, only to be disappointed when it was preached in Lithuanian, which many of them could not understand. Things only grew worse when the Union of Congregations agreed to a one-cent tax on kosher meat. (It turns out this was because the Union had promised to pay off the rabbi’s outstanding debts in Vilnius.) Within two years, Joseph had so thoroughly disappointed people that a handful of congregations independently selected a competing Chief Rabbi. Soon after, Rabbi Joseph had a stroke and while he was still able to perform his duties at Beth Hamedrash Hagadol, he withdrew from public view.

However, when Rabbi Joseph died in July 1902, thousands of mourners poured into the streets to lament his passing and a heated argument broke out as to which congregation would have the honor of burying him. Ultimately, Beth Hamedrash Hagadol prevailed, and his funeral procession was followed by as many as 30,000 mourners. (Finding so many Eastern European Jews in one place was too tempting for some hotheaded Irish New Yorkers, causing riots to break out along the route.)

As The Lo-Down notes, there have only been 18 hardship applications to the Landmarks Preservation Commission since 1965, but thirteen of those have resulted in demolitions, most recently St. Vincent's Hospital in Greenwich Village. Could Beth Hamedrash be next? If you are interested in it and its history, you'd best check it out while you can. The building has been vacant for years and you can't get inside, but it is well worth seeing the exterior if you are in the area.

UPDATE: You can also read more about the fate of the synagogue--and efforts to prevent its demolition--in Allison Siegel's excellent post at Bowery Boogie.

Read more about Beth Hamedrash Hagadol and the Lower East Side in
Inside the Apple: A Streetwise History of New York City.

Posted by Michelle and James Nevius at 11:27 AM