"Everywhere’s somewhere, and everywhere’s the same, really, and wherever you are is where it’s at. But it’s more so in New York." -- John Lennon 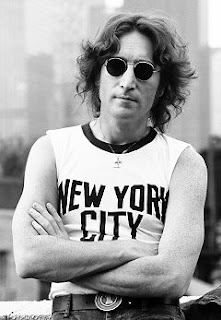 Unless you are in a media blackout, you've probably already heard that today marks the thirtieth anniversary of the murder of John Lennon. Lennon and his wife, Yoko Ono, moved to New York City in August 1971, first living on Bank Street in Greenwich Village before settling at the venerable Dakota on Central Park West. Lennon was returning from the recording studio on the night of December 8, 1980, when he was shot by Mark David Chapman, a fan who had earlier that day waited outside the Dakota for Lennon's autograph.

Media outlets around the world have been flooded with Lennon articles in the past few days; here's a sampling of some of the more interesting explorations into Lennon in New York City.

Read more about John Lennon in New York in
Inside the Apple: A Streetwise History of New York City.
To get RSS feeds from this blog, point your reader to this link.
Or, to subscribe via email, follow this link.
Also, you can now follow us on Twitter.
Posted by Michelle and James Nevius at 12:43 PM