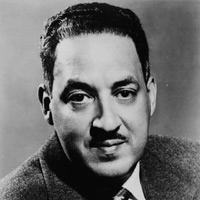 Forty-five years ago today, on August 30, 1967, Thurgood Marshall was confirmed as the first African American Supreme Court justice. Prior to serving on the Supreme Court, Marshall was most famous as chief counsel of the NAACP, based primarily in New York City. As the NAACP's attorney, Marshall argued 32 cases in front of the U.S. Supreme Court (winning 29 of them), most notably Brown v. Board of Education, which struck down the notion of "separate but equal" in public school education and beyond.

For many years, the NAACP was headquartered at 224 West 135th Street, near Adam Clayton Powell Jr Blvd.  In many ways, 135th Street was the most important street in the neighborhood. In addition to the NAACP, it was home to the YMCA, where many Harlemites stayed when they first arrived in New York, and was the epicenter of theaters and clubs where the Harlem Renaissance flowered. At the corner of 135th and Adam Clayton Powell was once a nightclub called Small's Paradise, famous for its rolling skating wait staff. Small's is long gone -- today the building houses an IHOP -- but above it is the Thurgood Marshall Academy, one of the best high schools in the area.

Around the corner on 134th Street is St. Philip's Episcopal Church, built in 1911 by the firm of Tandy & Foster, New York's first licensed African American architects. This was Thurgood Marshall's parish during his time in Harlem in the 1940s and 50s.

Many prominent African Americans (including the church's architect, Vertner Tandy) lived on nearby Striver's Row, considered by many to be the nicest development in the area. Marshall, however, opted to live further north in Sugar Hill, at 409 Edgecombe Avenue, a large apartment building built by Schwarz and Gross in 1917. Perhaps the single best address in Harlem, the building also housed W.E.B. DuBois, singer Julius Bledsoe, New York judge Eunice Carter, painter Aaron Douglas, and Roy Wilkins, the head of the NAACP.

Today, a one-bedroom apartment at 409 Edgecombe Avenue, which has gone coop, runs about $300,000. But back in the 1970s the building had fallen into such disrepair that the city seized it for nonpayment of taxes. In 1994, the New York Times reported that the city was preparing to sell the building back to its tenants for $250 per apartment. (That's not a typo.)

* * *
Read more about Harlem and the Harlem Renaissance in
Inside the Apple: A Streetwise History of New York City