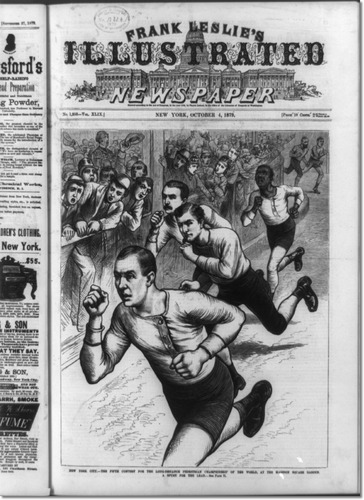 This last event has a long history -- there's been a race walk in the Olympics since 1908 and the sport grew out of the nineteenth-century obsession with long-distance walking, or pedestrianism, which hits its peak in the late 1870s. In 1878 and 1879 a series of six-day foot races known as the Astley Belt Races were held in London and New York; the ones in New York were the most talked about sporting events of their day, drawing thousands of spectators to Madison Square Garden to see a handful men battle it out to see who was the world's greatest pedestrian.

The craze for long-distance walking is usually traced back to Edward Weston, who in 1861 decided to walk from Boston to Washington, DC, for Abraham Lincoln's inauguration. It took Weston ten days and ten hours -- getting him to Washington four hours after Lincoln was sworn in -- but netted him favorable press. In 1867, Weston decided to walk from Portland, Maine, to Chicago, which took him 26 days, but which earned him a $10,000 prize. (In an era of dollar-a-day wages, this was a significant sum and, during its brief heyday, race walking would go on to become the highest paid sport in the country.)

As the appetite for long-distance walking increased, Weston created the six-day race, which could take place on an indoor track. The goal was simply to see who could walk the most miles over the course of six days and six nights. Unlike modern race walking, which has strict rules against running, six-day racers could combine walking, running, and could rest whenever necessary.

In 1878, Sir John Astley decided to sponsor the Astley Belt races in order to capitalize on the sport's growing popularity. The first Astley Belt race took place in London in 1878. Dan O'Leary, the only American in the contest, easily won by covering 520 miles. 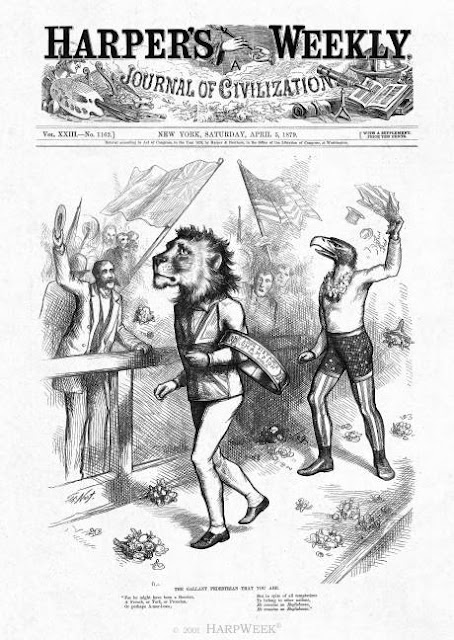 The championship then moved to New York to Madison Square Garden (or Gilmore's Garden as it was then known). Over the course of six days, 30,000 spectators turned out to see local favorite John Hughes fall to O'Leary. Immediately, the city was bitten by the race-walking bug; the third Astley Belt race was quickly scheduled for March 1879 with only four competitors. Three were Americans: O'Leary, Charles Harriman, and John Ennis; the fourth was a young Englisman named Charles Rowell, who'd been sent over to try to capture the race-walking title for the U.K. The race was one of the most closely followed of the era. Hourly updates were posted in saloons across the city and tens of thousands of dollars were wagered on the outcome. (Indeed, the athletes themselves could supplement the race's large purse by getting in on some side-bet action.)

O'Leary, the defending champion, looked weak from the start and dropped out after 215 miles. (Rumors swirled that he'd been drugged, but O'Leary denied them.) Madison Square Garden increased the admission price to $1 to take advantage of the throngs of people trying to get inside -- by some reports, over 70,000 witnessed the race. By the fifth day, it was clear that Rowell, the English challenger (pictured above as a British lion in a Thomas Nast cover for Harper's), would win. He stopped after hitting the 500-mile mark. Neither Ennis nor Harriman could match him, and Rowell captured the title and the $20,000 first prize.

A fourth Astley Belt race, back in London, saw Edward Weston, the sport's pioneer, emerge victorious. This set the stage for a fifth, and final, showdown at Madison Square Garden pitting Weston against Rowell and a pack of other racers. The race began just after midnight on September 22, 1879. Rowell, the heavy favorite, pulled ahead early and Weston settled toward the back of the pack. On the fifth day, Rowell seemed on the verge of dropping out -- he took an uncharacteristically lengthy rest and when he emerged from his sleeping tent, he seemed ill. But the Englishman rallied, eventually covering 530 miles.  Weston, meanwhile, had managed just 455 miles.

As quickly as six-day race walking had captured New York's imagination, the sport began to fade. This was, in part, due to the rise of cycling, which became a popular sport at Madison Square Garden. Also, the long-distance walkers set themselves to other, less spectator-friendly pursuits, such as cross-country walks. Daniel O'Leary and Edward Weston each walked across America. Charles Rowell turned his attention to the marathon race, which was also supplanting race walking as a competitive sport.

Six-day racing, however, never faded away. Sri Chimony's followers, based in Queens, continue to host six-day events on a regular basis in New York, and there are competitive events around the world. The current world record, held by Yiannis Kouris, is 644 miles.


* * *
Read more about Madison Square Garden and sports in New York in
Inside the Apple.