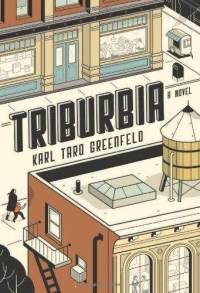 When we give walking tours that include Tribeca (or TriBeCa, as it's still sometimes known), we often find that our clients are disappointed. Native New Yorkers seem to expect a grit and grime that's no longer there -- DIY loft conversions and the remnants of the old produce warehouses and factories that used to line the streets. Somehow, the gentrification of the neighborhood has passed them by. Visitors, on the other hand, are on the lookout for celebrity sightings, and wonder where the trendy shops and restaurants are hidden. The neighborhood they've visualized is something akin to the Meat Packing District or SoHo. To borrow a phrase from Gertrude Stein, the problem with Tribeca is that there appears to be no there there.

Both of these facets of Tribeca are captured in Karl Taro Greenfeld's new novel Triburbia, which HarperCollins was kind enough to send to us. The novel is a set of vaguely interconnected short stories concerning the lives and infidelities of a group of men who live in Tribeca and have coffee together many mornings a week after dropping their children at P.S. 234, the neighborhood's famed public elementary school.

The men have seemingly little in common beyond their children's school, though as the stories progress it becomes clear that their lives overlap in ways that they don't realize. Many of the stories don't actually take place in Tribeca -- one is set entirely in the Mediterranean and others in various parts of Manhattan -- but the constant change downtown is a recurring theme.

The longest-term resident in the neighborhood is a puppeteer who lives in a rent-controlled loft at 47 Lispenard  Street (all of the addresses are fictional). When he moves in, Tribeca still has


"streets...clotted with double-parked panel trucks and idling semis, the drivers asleep inside their cabs, the carbon monoxide fumes wafting up to my loft. There were still a few factories and sweatshops, and suppliers and subcontractors for the small manufacturers who had persevered in their storefronts after the closing down of the West Side piers. There was a store selling radio parts down on Murray, a guy who serviced and sold spare letters for printing presses over on Broadway, and downstairs in my building were three Italians who fixed sewing machines. I could find a full set of rasps or chisels within a block of my new apartment, but if I wanted a bagel I had to walk twenty-five blocks north."

Contrast that to the Tribeca of today, as narrated by the sound engineer -- most of the characters are known by the profession, not their name -- who is also one of the longer-term denizens of the area:


"We are a prosperous community. Our lofts and apartments are worth millions. Our wives vestigially beautiful. Our renovations as vast and grand in scale as the construction of ocean liners, yet we regularly assure ourselves that our affluence does not define us.... Our neighborhood was settled by artists so long ago the story feels apocryphal. For almost as soon as the larger world became aware of Tribeca, in rushed developers and syndicators and builders and realtors and the name turned into a synonym for a kind of [safe] urban living.... A certain type of family arrived, drawn by that safety and the faux-bohemianism of Downtown, driving out the actual bohemians. And now, we faux-bohemians find ourselves facing the onslaught of those who don't even pretend to give a shit about books or theater."

Each of Greenfeld's stories is compelling, but in the end, the whole of the novel seems less than the sum of its parts. Perhaps that's a good thing, for it is an accurate reflection of Tribeca, too. There are certainly some outstanding pieces of architecture and interesting stories laced among its streets, but the area never seems to cohere the way Greenwich Village or SoHo does. Greenfeld also makes Tribeca and its residents seem isolated -- as the title of the books suggests, this is a suburban enclave in New York, not the city itself -- and maybe that's also a truth about the neighborhood, a disconnect from the vibrancy of the city at large, that Greenfeld has perfectly captured.

If you've read Triburbia, let us know your thoughts about how you think it depicts this neighborhood.


And if you want to know more about Tribeca (and SoHo) you can take the tour
or check out Inside the Apple: A Streetwise History of New York City