Yesterday, Curbed reported that the penthouse at City Spire (150 West 56th Street) has been listed for $100,000,000 (yes, one hundred million dollars). If it sells for the asking price, that would make it the most expensive apartment sale in New York history.

This got us wondering: what was the most expensive apartment in the city a century ago? Not surprisingly, the answer is 998 Fifth Avenue. Erected in 1911, it is still one of the grandest apartment buildings on the Upper East Side. 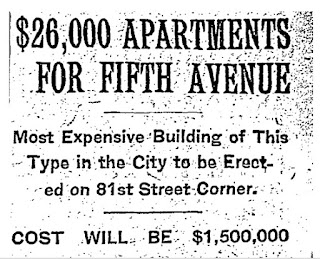 As the New York Times reported in 1910, the neighborhood was being "invaded" by the 12-story McKim, Mead, and White apartment building. (Up till then, Fifth Avenue had resisted large-scale luxury apartment buildings, those being the domain of the ne'er-do-wells on the Upper West Side.) The building was to have only eighteen apartments, none smaller than 17 rooms. According to a contemporary advertisement, each unit had a separate servants' hall with six servants' bedrooms. The buildings amenities seem rather pedestrian: concealed radiators, a jewel safe, cold storage in the basement. The building did boast refrigeration, but the Ansonia on the Upper West Side had been offering that almost a decade earlier.

By the way, not everyone paid top dollar: the building was listed by Douglas Elliman and Elliman convinced Senator (and former Secretary of State) Elihu Root to move in at the cut rate of $15,000 a year. As Robert A.M. Stern, et al, note in New York 1900, "once Root, who had earlier established the respectability of a Park Avenue address...moved into 998, others immediately followed." Around the time he moved in, Root won the Nobel Peace Prize, which can't have hurt in Elliman's PR campaign for the building.