One of grandest Art Deco buildings in Lower Manhattan is 20 Exchange Place, the old City Bank-Farmers Trust Building (now a rental apartment building). The building was designed by the firm of Cross & Cross and erected in 1930, just after the merger of the National City Bank of New York and the Farmers Loan and Trust Company.

Though it can be hard to see from the street, perhaps the most notable decorative feature of the building is the array giant heads that adorn the tower at the nineteenth floor (right). These fourteen figures are the "Giants of Finance," vaguely based on Middle Eastern models.

Much more discernible from the street are the eleven coins that flank the entryway to the building. Each represents a country with which the bank did business, including at the bottom left an American Indian-head nickel prominently displaying the building's date. Above the nickel is an Italian 20 lira coin from 1927, when Italy was firmly under the control of the Fascists and Il Duce, Benito Mussolini. 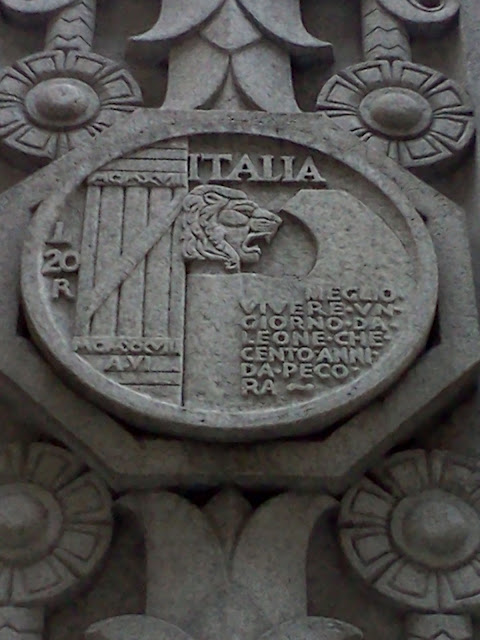 On the left, the coin features a Roman fasces, the bundle of sticks with an axe that was a symbol of the ancient Roman Republic and co-opted by the Italian Fascists. At the lower right is carved "Meglio Vivere un Giorno da Leone Che Cento Anni da Pecora" ("It is better to live one day as a lion than 100 years as sheep"), an older proverb that Mussolini had taken as his own.

The City Bank-Farmers Trust (which would later go on to become Citibank) was not the only place in the city to display Mussoilini-era imagery. At Rockefeller Center, the Palazzo d'Italia was originally decorated with a massive pyrex sculpture by Attilio Piccirilli entitled "Sempre Avanti Eterna Giovinezza" ("Advance Forward, Eternal Youth") that struck viewers as redolent with Fascist iconography. (The inscriptions on the side read "Art is work, work is art.") 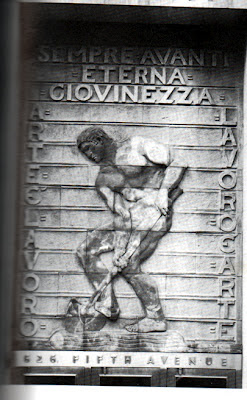 On December 12, 1941, just five days after the bombing of Pearl Harbor, Piccirilli's sculpture was boarded over and in 1965 it was finally replaced with the current piece, "Italia," by Giacomo Manzu. However, all Fascist imagery was not erased: at the top of the building are Leo Lentelli's bas relief sculptures of the "Four Periods in Italian History," which depict ancient Rome, the Renaissance, the Unification of Italy, and Fascism (again, symbolized by a fasces).

* * *
There's much more on Art Deco New York
and the history of Rockefeller Center
in
Inside the Apple: A Streetwise History of New York City

Posted by Michelle and James Nevius at 8:33 AM