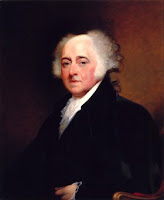 Happy July 4th, everyone. As readers of Inside the Apple and this blog know, today is just one of many days that holds a claim to being America's Independence Day. As we've blogged before, July 2 is probably the day we should celebrate the holiday, but we'd also make a strong case for July 9.

Did you also know that on America's fiftieth birthday, July 4, 1826, both Thomas Jefferson and John Adams died? Supposedly, Adams's last words were, "Jefferson survives," even though Jefferson had died a few hours earlier.

Have a safe and joyful holiday!

Posted by Michelle and James Nevius at 11:41 AM