Joseph Pulitzer and the World's First School of Journalism 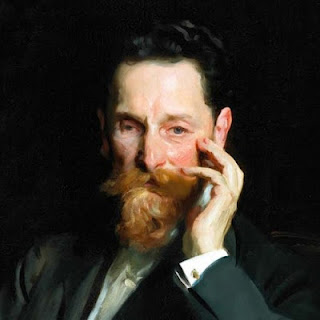 A century ago today, on July 2, 1912, Kate Pulitzer, the widow of newspaper publisher Joseph Pulitzer, traveled to Columbia University to lay the cornerstone for the world's first school of journalism.

Pulitzer is best known for his stewardship of the New York World, which he bought from Jay Gould in 1883. One of the World's biggest early successes was spearheading the stalled fundraising campaign for the Statue of Liberty. In the 1890s, his biggest rival was William Randolph Hearst, who ran the New York Evening Journal; their particular brand of sensationalized, "yellow" journalism made the World and the Journal the highest circulating papers in the country. The World's peak came during the Spanish-American War and the frenzy over the sinking of the USS Maine.

Pulitzer had first proposed a school of journalism in 1892, when Columbia University was planning its relocatation to Morningside Heights under the guidance of President Seth Low. Low, who was cultivating Pulitzer as a donor, was interested in the publisher's money but less interested in a full-time journalism program. After Low resigned from Columbia's presidency in 1902 to become mayor of New York, Pulitzer broached the idea with his successor, Nicholas Murray Butler. Butler was much more receptive, and quickly things began to fall into place to have a school ready to open in 1903. Pulitzer, however, sabotaged the idea by wrestling with Butler over the school's advisory board. When Pulitzer insisted that the presidents of Harvard and Cornell universities have a seat on the board, Butler demurred.

Ultimately, Pulitzer decided that Columbia would have $2 million to establish the school and the journalism prizes the now bear his name--but only after his death. Pulitzer died on October 29, 1911, and plans were soon set in motion for the school to open the following year. For the first year, classes met in other academic buildings; the journalism building--today called Pulitzer Hall--that Mrs., Pulitzer laid the cornerstone for a century ago, was not ready until 1913. A time capsule was buried  behind the cornerstone containing a copy of the first course catalog along with copies of the papers whose publishers did end up on the school's advisory board: the World, the Sun, the Brooklyn Daily Eagle, and the Times.


* * *
For more on Joseph Pulitzer please see
Inside the Apple: A Streetwise History of New York City

Posted by Michelle and James Nevius at 11:49 AM