Tavern on the Green to Get New Management 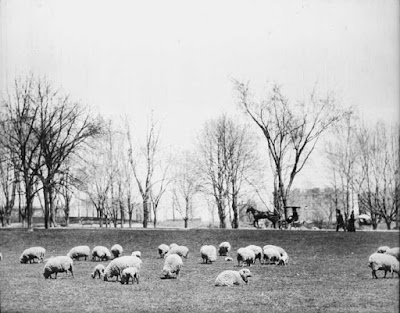 New York's Department of Parks has announced that next year Dean J. Poll, who currently holds the license to operate the Boathouse in Central Park, will also take over the management of Tavern on the Green.
Among the changes Poll will implement is a thinning of the landscaping at the rear of the building to open up the vistas toward Sheep Meadow. What many people don't realize is that throughout most of the park's life, Sheep Meadow's official name was "the Green." Thus, when the restaurant first opened in 1934, it made sense that it was Tavern on the Green. (Perhaps techinally in should have been Tavern near the Green, since it is cut off from its namesake by the wide swath of the ring road.)
The Green came to be nicknamed Sheep Meadow because from 1864 to 1934 it housed a flock of pedigree Southdown and Dorset sheep. The removal of the sheep in 1934 is a story we tell in Inside the Apple. There are many plausible reasons why the sheep may have left, but certainly the main one is that the Parks Department (in the person of Robert Moses) had its eye on their sheepfold, an elaborate 1870 structure designed by Jacob Wrey Mould. As soon as the sheep were out, their barn was tranformed into Tavern on the Green.
* * *

Posted by Michelle and James Nevius at 2:18 PM

Robert Moses certainly left his mark in a lot of places. I had no idea he was gunning for sheep, too.

I have just put you on my NY History blogroll, something I meant to do ages ago.

Thanks for the add. (And the shout out in today's blog.)