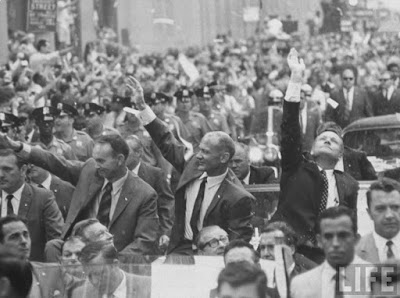 photo from the LIFE magazine archives on Google.com

Earlier this summer, the world celebrated the 40th anniversary of the Apollo 11 moon landing, which took place on July 20, 1969. Today marks another Apollo anniversary—the massive ticker tape parade for Buzz Aldrin, Neil Armstrong, and Michael Collins. At the time, many claimed it was the largest ticker tape parade New York had ever seen, but as we researching Inside the Apple, we found that claim was made for many parades and it’s almost impossible to verify. (Four million people were said to have attended the Apollo parade—an impressive number, even if it’s not the largest.)

It was also one of the fastest ticker tape parades. The astronauts started at Bowling Green at 10:17 a.m. (about half an hour ahead of schedule) and arrived on the steps of City Hall just fourteen minutes later! Many people who showed up for the parade were disappointed to discover that the astronauts had already passed them by…. By 1:15 p.m. the astronauts were back at Kennedy airport to go to Chicago. They ended the day with festivities in Los Angeles. Having just been to the moon and back, a quick one-day jaunt across North America must not have seemed like such a big deal.

For more on the origin of the ticker tape parade and a walking tour of the “Canyon of Heroes,” check out Inside the Apple. Or join us this Sunday for our free tour of that neighborhood, during which we’ll focus on the American Revolution.