For Sale: The Narrowest House in New York 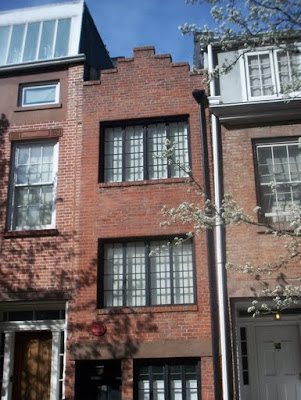 The press has been having a field day this week with the news that New York's narrowest house -- No. 75-1/2 Bedford Street -- is on the market for $2.75 million.
This is one of the most popular stops on our tours of Greenwich Village and appears in every guidebook. Unfortunately, most of those guidebooks also perpetuate the stories that Cary Grant and John and/or Lionel Barrymore stayed at the house, despite the fact that there's not a shred of evidence to connect either one to the home.
The entire property in that area was once owned by a coppersmith named Harmon Hendricks. His house, No. 77 Bedford, stands at the corner of Bedford and Commerce; built in 1799 it is the oldest home in the Village. Though No. 75-1/2 is often dated to 1873 (when it appears on tax rolls), it is stylistically older and may have been built as early as the 1850s.
The entire Henricks property was bought by the Cherry Lane Theatre in 1923, who converted a former brewery and factory space at 38 Commerce into the theater and planned to rent the rest of the property for profit. The Cherry Lane was founded by a group of refugees from the Provincetown Playhouse (which has been in the news a lot recently, too) including Edna St. Vincent Millay, who moved into the narrow house at 75-1/2 Bedford in 1924. It was Millay and her husband who remodeled the home, adding a skylight and the Dutch gabling on the front and back.
The other famous tenant to live in the house is anthrpologist Margaret Mead. What most press coverage leaves out is that Mead was living there with her sister and brother-in-law, the cartoonist William Steig (best known today, perhaps, as the creator of Shrek).
The New York Post has a feature on the house, including a photo essay in the post that doesn't necessarily reveal a lot about the interior, but does give a great view of the unique four-in-a-row burner stove. Over at Curbed, you can download the floorplan as you mull over whether or not $2.75 million is a good price for owning a conversation piece.
* * *

We have three different tours that you can take to see the city's narrowest house.
* * *
And speaking of CityListen -- they are having a great contest right now to give away a free pair of Kuru walking shoes. All the details are at http://blog.citylisten.com/2009/08/favorite-walks-contest/. But hurry -- the deadline for entries is September 6th.
* * *

Recently, we have looked at some properties for sale in Waverly,but haven't had a chance to check them out yet.But this area seems hard to get to know more.One we have heard so far is that there can be an 'unusual' odor in the area due to a cheese-processing plant.