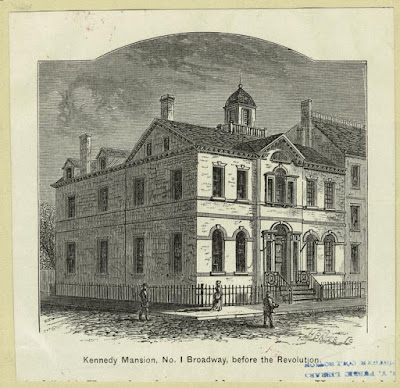 As we have written previously, we will be leading a free tour on Sunday, August 16, of Revolutionary War Lower Manhattan. (See http://www.insidetheapple.net/tours.htm for more details.)
One of the stops on the tour will be One Broadway, where the Washington Building -- later known as International Mercantile Marine -- now stands. But back in the 18th century, the base of Broadway was home to Archibald Kennedy, New York's receiver-general (i.e., the customs collector), and later the Earl of Cassilis.
Kennedy built his mansion ca. 1760; because Broadway was then much closer to the Hudson, Kennedy would have had a fine view out over the harbor and in the summer of 1776, he would have seen the massive British fleet assembling beyond Staten Island. Between June 29 and August 12, nearly 200 ships arrived, the largest naval fleet since antiquity. One observer, a soldier named Daniel McCurtin, wrote in his journal:

"[I] spied as I peeped out the Bay something resembling a wood of pine trees trimmed.... I declare I thought all of London was afloat."

During the war, Kennedy left the city and the house became George Washington's headquarters during the planning of the Battle of Brooklyn, which took place in late August 1776. When the British captured New York, the home -- which escaped the Great Fire of 1776 -- was used by the British army. After the Revolution, the house was rented by Isaac "King" Sears. A prominent member of the Sons of Liberty, Sears was was involved in the Stamp Act Protests in 1765 and the Battle of Golden Hill in 1770, a skirmish just north of Wall Street that some call the first bloodshed of the Revolution. Sears paid £500 a year, probably the highest rent in the city.
The house was later owned by John Watts, a successful merchant and founder of the Leake and Watts Orphan House in Morningside Heights.
In 1882, Kennedy's house (by then a boardinghouse) was demolished to make way for the Washington Building, which still occupies the site. When the Washington Building was erected, it had more office space than any building in New York.
* * *
We will be talking more about One Broadway, George Washington, "King" Sears, John Watts, the Stamp Acts protests and more on our FREE walking tour on August 16.
Or you can pick up a copy of our book, Inside the Apple: A Streetwise History of New York City.

Posted by Michelle and James Nevius at 5:06 AM