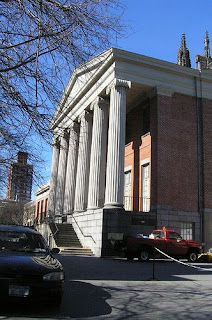 photo by gmpicket on flickr
The oldest building in Morningside Heights stands on the grounds of the Cathedral of St. John the Divine. Opened in 1843, this handsome Greek Revival temple designed by Ithiel Town has a strange history.
One hundred eighty-two years ago today--on June 2, 1827--merchant John George Leake passed away at age 75. He had no children or other lineal heirs, so he decided to leave his money to Robert Watts, the son of his best friend, John Watts. There was only one catch: Robert Watts would have to change his last name to Leake in order to claim the inheritance.
It is a little unclear what happened next, but before Robert Watts could get the courts to legally change his name he died of, in the words of one writer, "a severe cold contracted during a game of ball."  John Watts was then faced with the dilemma. He didn't really want the money--after all, his son had forsaken him to become John George Leake's heir--but what was he going to do with it?
It turned out that had his son refused the inheritance in the first place, the money would have gone to found an orphanage. So John Watts approached the state to relinquish his claim on the money. In 1831, Leake and Watts Orphan House was founded and in 1843, they moved into their home in Morningside Heights.
The only other major institution in the neighborhood was the Bloomingdale Asylum for the Insane, which stood where the main campus of Columbia University now stands.
At the end of the 19th century, a group of John George Leake's distant relatives wormed out of the woodwork to claim that they had been defrauded of their rightful inheritance. It took some time, but eventually their case was dismissed.
* * *
A much more detailed consideration of the Leake and Watts Orphan House and the early history of Morningside Heights can be found in Inside the Apple, available at bookstores everywhere or online.
A couple of weeks ago, we gave a tour of Morningide Heights (including Leake and Watts) for a wonderful group from openhousenewyork. Photos from the tour--including a great shot of the St. John the Divine's stunning white peacock--are online at http://www.facebook.com/album.php?aid=84219&id=48448504645&ref=nf.
Our next tour, of Financial District architecture, is on Sunday, June 21, at 5:00PM -- and it's free! For more information, see our tours page.

Posted by Michelle and James Nevius at 12:01 AM