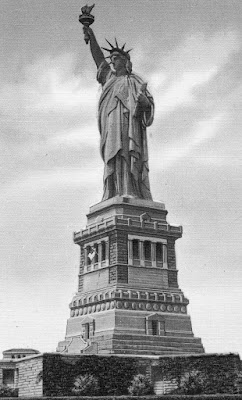 The National Park Service has announced the details for getting tickets to visit the crown of the Statue of Liberty, which has been off limits since just before the 2001 attack on the World Trade Center. The crown will reopen July 4, 2009, and tickets go on sale this Saturday, June 13, at 10:00 a.m. You can buy tickets up to one year in advance.

(While it is true that all access to the crown was cut off after 9/11, the Park Service had, in fact, been limiting visitors throughout the summer of 2001 in an attempt to control crowds and preserve the statue's structural integrity.)

Visitors will be allowed up in groups of 10, guided by a park ranger. The climb is 354 steps and, as the press release points out, the statue's interior can be 20 degrees hotter than the ambient outdoor air temperature. No word yet on how long you'll be allowed to linger at the crown once you're up there.

For all the details, visit http://www.statuecruises.com/ferry-service/pdf/STLI-FAQs_Crown-Tickets_Final.pdf

* * *
The Statue of Liberty -- and Ellis Island, which is served by the same ferry -- are both discussed in detail in Inside the Apple: A Streetwise History of New York City. It's available at most major retailers and online.

Posted by Michelle and James Nevius at 2:55 PM