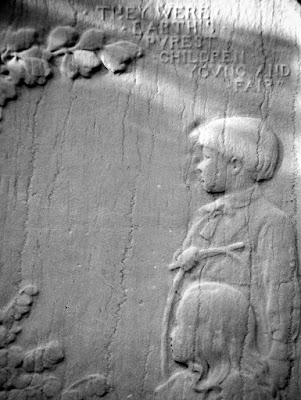 Today (June 15, 2009) marks the 105th anniversary of the sinking of the General Slocum, a steamship that had been hired by St. Mark's Evangelical Lutheran Church in Kleindeutschland ("Little Germany") to take its parishioners on their annual Sunday School picnic.
(Though it was a Sunday School outing, it did not take place on a Sunday, as is sometimes erroneously reported; June 15th was a Wednesday.)
As we write in Inside the Apple: A Streetwise History of New York City:

The...boat carried families from just about every block of the area surrounding Tompkins Square Park, the heart of the German neighborhood. The boat left from the pier at East Third Street around 9:30 in the morning and trouble developed almost immediately. A spark, probably from a stove, set the stern on fire; as the ship steamed up the , observers on either bank could see smoke and flames billowing from the vessel. Captain William Van Shaick could have headed for Manhattan, the Bronx, or Queens. Instead, he decided to make for , which lies in the near the entrance to the Long Island Sound. Captain Van Schaick, who survived the tragedy, later said that he’d hoped in doing this to keep the fire from spreading, but in fact he was piloting into a steady wind and the blaze quickly got out of control, enveloping the ship’s three decks, which then collapsed. Van Schaick may have also picked North Brother Island because of the hospital there (where Typhoid Mary would later spend the last two decades of her life). However, by the time the ship ran aground, the hospital staff could do little to help: most of the passengers had already drowned or burned to death.
Compounding the tragedy was the ship’s utter disregard for safety standards. Life preservers that were shoddily constructed in the first place had not been replaced in years. Mothers, hoping to save their children, bundled them into life preservers and threw them over the side only to watch them drown as the defective floatation devices became instantly water-logged and sank. The ship’s lifeboats could not be detached from the vessel and the crew had no instruction on how to handle a fire. Indeed, one of the only things Captain Van Schaik was ever punished for was lack of safety preparedness. (The jury refused to find him guilty of manslaughter.)

The official death toll stands at 1,021 though many--including Ed O'Donnell in Ship Ablaze: The Tragedy of the Steamboat General Slocum--calculate that the loss of life was even higher.
A small monument, which looks like a Greek funeral stele, stands in Tompkins Square Park to commemorate the children who lost their lives that day. But that is Kleindeutschland's only real marker to the event that changed that neighborhood--and New York--forever.
The event does make a few appearances in popular culture; perhaps most famously, it is mentioned in James Joyce's Ulysses, which takes place entirely over the course of the next day, June 16, 1904. The sinking of the General Slocum is recreated in the film Manhattan Melodrama, starring Clark Gable, Myrna Loy, and William Powell (the latter who would go on to star in the Thin Man films) and it even inspired an unfinished classical piece by American composer Charles Ives.
* * *
Much more about the General Slocum tragedy and New York's German community in the East Village can be found in Inside the Apple, including a walking tour of important German-American sites.

Posted by Michelle and James Nevius at 3:19 PM