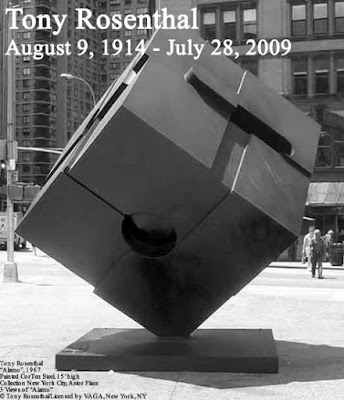 EV Grieve just alerted us to the fact that sculptor Tony Rosenthal passed away last week at the age of 94.
Rosenthal is best known as the artist behind the rotating Astor Place Cube (officially, The Alamo -- so called because his wife thought it was a good name for an impenatrable object).
There are many other places in the city to view Rosenthal's public art, including:
Also, according to the artist's website, a temporary exhibition is currently on view in the Ralph Lauren flagship store at 72nd Street and Madison.
Another interesting note: the Astor Place Alamo -- which was originally installed temporarily as part of a citywide "Sculpture in Environment" show -- is not one of a kind. Examples of Rosenthal's cube sculptures can be found in private and public collections, including Pyramid Hill Sculpture Park in Hamilton, Ohio, and at his alma mater, the University of Michigan, at Ann Arbor (where the piece is called Endover).
You can also read Tony Rosenthal's obituary in the New York Times.
* * *
To get RSS feeds from this blog, point your reader to this link.
Or, to subscribe via email, follow this link.
Posted by Michelle and James Nevius at 7:31 PM