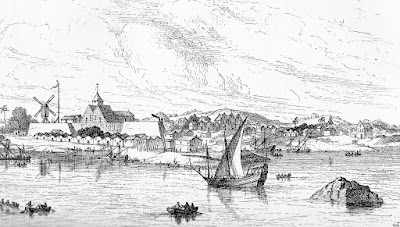 On Sunday, September 13, James will be leading a special public walking tour of the Financial District in honor of New York's 400th birthday.

James is a 10th-generation New Yorker (also known as a “Knickerbocker”), whose ancestors include the last city secretary of New Amsterdam, Johannes Nevius, and the first Dutch pastor of Brooklyn, Johannes Polhemus. A historian and guide, James will lead participants through the streets that once made up the capital of this strategic Dutch outpost and trading town.

Stops will include the archaeological remains of old New Amsterdam, including the stadt huis block, the site of Peter Stuyvesant's grand home and garden, the place where (perhaps) Peter Minuit bought the island of Manhattan from local natives (but not for $24 worth of beads), the former home of the Wall Street wall, and other important reminders of Manhattan's early history. And since we are celebrating the arrival of Henry Hudson in September 1609, we will also stop by the Hudson River.

September 13th will be a great day to be in Lower Manhattan. The city is celebrating “Harbor Day” in honor of Henry Hudson and the city’s 400th anniversary, the Dutch will have set up special exhibits out on Governors Island, and the new exhibit of New Amsterdam history opens that day at the South Street Seaport museum. We look forward to being a part of your celebration of Dutch heritage.

Copies of Inside the Apple will be available for sale & signing after the tour.

Advance reservations required. Click here to sign up for this tour – you can register and pay with our e-commerce partner, Wufoo.com.

In other news, James will also be appearing today at 4:00 p.m (on the East Coast; others adjust accordingly) on "The Bite," Eric Gordon's internet radio show about New York City travel and tourism. You can get all the details about the show -- and tune in -- at http://www.blogtalkradio.com/BTSQ/2009/09/02/The-Bite-with-Eric-Gordon.