The Bombing of Wall Street 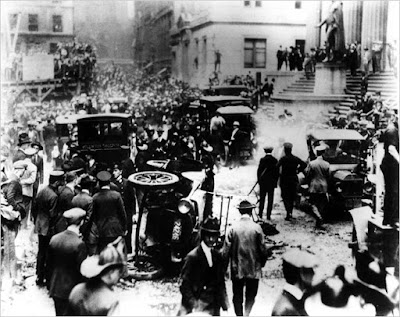 Today marks another tragic anniversary in New York City: on September 16, 1920, a bomb exploded on Wall Street, killing 30 people and injuring over 200 more. It was the deadliest terrorist attack on American soil before the Oklahoma City bombing and still one of the greatest unsolved crimes of the 20th century.

At 12:01 pm on Thursday, September 16, 1920, the church bells of Trinity Church, Wall Street, finished pealing and were suddenly replaced with another noise—the horrible sound of 500 pounds of lead sash weights exploding from a horse-drawn wagon on Wall Street....

As the smoke cleared and people began to pick themselves up from the street (including Joseph P. Kennedy, JFK’s father who was then a stockbroker), they were faced with a scene of carnage and devastation. Approximately 100 pounds of dynamite had expelled the sash weights into the air, shattering windows and tearing through nearby pedestrians. The most gruesome sight was the north wall of Morgan’s Bank. Amid the gouges in the marble from the shrapnel there was also a woman’s head—severed from its body but still wearing a proper hat.

You can read much more about the 1920 bombing, J.P. Morgan, and New York in the 1920s in Inside the Apple: A Streetwise History of New York City. It’s available online and at all major bookstores.

Posted by Michelle and James Nevius at 12:07 PM