The Takeover of New Amsterdam 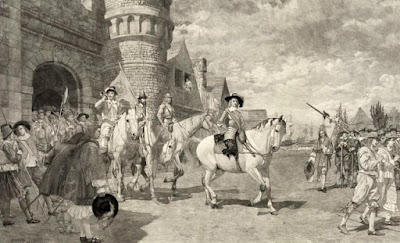 Amidst all the hoopla surrounding this week's celebration of New York's 400th birthday --the quadricentennial of Henry Hudson's arrival in our harbor in September 1609 -- another anniversary is being quietly forgotten: today marks the 345th anniversary of the English takeover of New Amsterdam and, thus, the creation of New York.
The English had been eyeing Manhattan since the establishment of the first colony in Jamestown, Virginia, in 1607.* When Charles II was restored to the throne in 1660, he began earnestly contemplating how to unite his colonial empire that ranged from Maine to the Carolinas. He was especially urged on by his younger brother, James, Duke of York, who had recently invested heavily in a slave trading venture in Africa and wanted to drive a wedge in the Dutch overseas mercantile economy. While Dutch ports in Africa, the Caribbean, and the East Indies were more important, New Amsterdam was easiest to conquer.
Early in 1664, Charles II granted his brother a "Duke's Charter," essentially putting James in control of the North American colonies. In turn, James dispatched one of his loyal soldiers, Colonel Richard Nicolls, to take New Amsterdam in the name of the king.
After a brief stop in Boston, Nicolls and his small flotilla--a total of four ships and perhaps as many as 600 soldiers--arrived in Brooklyn in August 1664. Nicolls sent word to the Dutch governor, Peter Stuyvesant, that the English were offering extremely favorable terms of surrender: if the Dutch gave up peaceably, they would be allowed to keep their property and their rights. They would simply need to swear an oath of allegiance to Charles II. 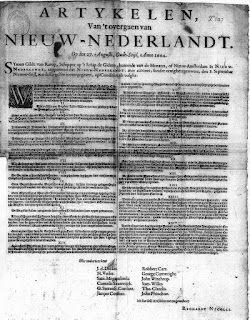 Stuyvesant put on a brief show of refusing to capitulate, but realizing he was outgunned, didn't have much food, and had even less water, the governor agreed to surrender without either side having fired a shot. At Stuyvesant's farm (or bowery, which is today honored in the street of the same name), the Dutch and the English signed 23 Articles of Capitulation, which guaranteed certain rights, including "liberty of their consciences in Divine Worship and church discipline" and that the Dutch people "shall still continue free denizens and enjoy their lands, houses, goods, ships, wheresoever they are within this country, and dispose of them as they please."
Once the Articles of Capitulation had been signed, all that remained was for Stuyvesant and the Dutch garrison to quit Fort Amsterdam, which happened on September 8, 1664. With great pomp, Stuyvesant led the garrison out of the fort and down to the East River, where a ship awaited to take them away. (They didn't get far; Stuyvesant was just heading to his uptown farm; where the soldiers went that day is unclear, though they did eventually make it back to the Netherlands.)
* Indeed, as we discuss in Inside the Apple, the English initially considered Manhattan to be in the northernmost part of the Virginia colony. When the Pilgrims first left on theMayflower for the New World, it was Manhattan they were aiming for, not Massachusetts, since they were required to settle in English territory. We'll talk more about that in a future blog post.
* * *
The celebration surrounding New York's birthday are culminating this Sunday with Harbor Day, which marks the 400th anniversary of Hudson's arrival. One way you can celebrate is to join us for a special Knickerbocker's Walking Tour of New Amsterdam. James is a "Knickerbocker" (a descendant of many of the original Dutch settlers) and he will be leading a historical walk through all of New Amsterdam's history, from Hudson's arrival in 1609 to the surrender in 1664. All the details can be found at http://www.insidetheapple.net/tours.htm.
* * *