The First Speaker of the House 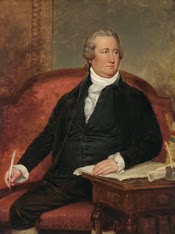 This year marks the 225th anniversary of the United States Congress, which began meeting in March 1789 at Federal Hall in Lower Manhattan. On April 1, the newly seated House of Representatives elected its very first speaker, Frederick A. Muhlenberg, a noted Lutheran pastor from Pennsylvania, and the son of Henry Melchior Muhlenberg, the leading Lutheran minister in the United States.

Muhlenberg's ties to the city extended deeper than just his time as Speaker. In 1773, he'd been called to be the pastor of Christ Church, the Lutheran parish located at the corner of Frankfort and William streets. (Pace University now stands here, obliterating William Street.) The church, built in 1767, was known as the "Old Swamp Church," a reminder that the area north and east of City Hall Park was still marshy ground in those days. Eventually, the swamp would be drained along with the Collect Pond, giving rise to the area known as Five Points.

Muhlenberg's tenure at the Old Swamp Church only lasted two years. An ardent patriot, he fled the city in 1776, around the time of the British takeover of the city. He went on to serve in the colonial assembly, be elected to the House from Pennsylvania, and be honored as first speaker. 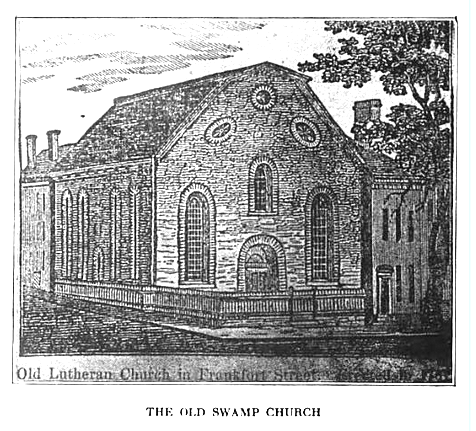 Muhlenberg also became the House's third speaker (1793-95), and during that time a bill was introduced to have some laws translated into German. The bill was voted down 42-41, and later gave rise to the myth that Muhlenberg cast the decisive vote not to have German be the official language of the United States. However, the bill never had anything to do with an "official language" (which the U.S. has never had) and there's no evidence that Muhlenberg's was the deciding vote.

Footprints in New York comes out April 15, 2014, but you can pre-order today from Amazon, and some outlets such as Barnes & Noble are already shipping. Also, it is already on store shelves at the Strand.

And, of course, Inside the Apple is available at fine bookstores everywhere.
Posted by Michelle and James Nevius at 8:01 AM