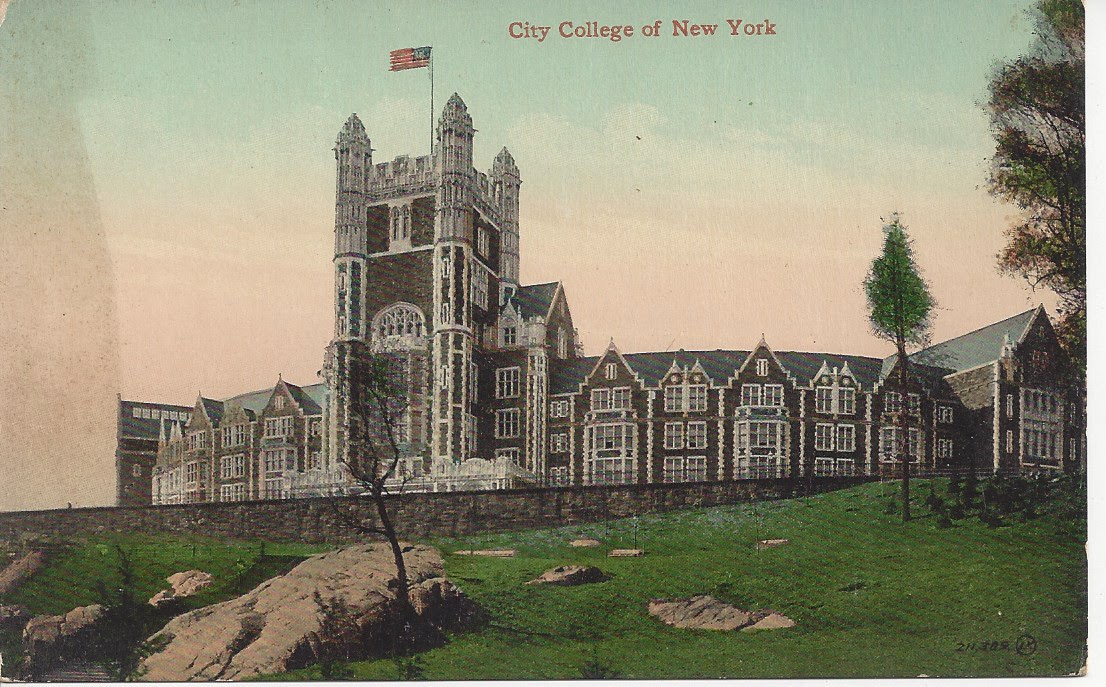 This postcard, from about 1910, shows Shepard Hall at City College, and its commanding view of Hamilton Heights.

When City College was founded as the Free Academy of the City of New York in 1847, it was located downtown and soon outgrew its home. As we write in Inside the Apple:

Though enrollment increased dramatically in the years following the Civil War, the city did not approve a move by the college until 1895, when a tract of land in Harlem, along Convent Avenue, was purchased and George B. Post (who would soon begin work on the New York Stock Exchange) was commissioned to create a new campus.

The resulting structures are the city’s best example of Collegiate Gothic architecture. Though there are entrance gates on all four sides, the tall walls of schist make the college an imposing, protective fortress—a true medieval walled city. Post chose Manhattan schist as his main material not only because of its aesthetic qualities, but because it was the right price: much of the bedrock came from the tunneling for the nearby IRT subway, which also provided a convenient station just a block away from campus.

The grandest of Post’s five original 1908 campus buildings was the Main Hall (today’s Shepard Hall), a soaring cathedral-like space that was the primary classroom building. Other buildings housed academic offices and the college’s power plant, complete with a tall battlement-studded smokestack. (The smokestack still towers over Compton Hall, but is inoperable.)

And, of course, Inside the Apple is available at fine bookstores everywhere.
Posted by Michelle and James Nevius at 9:25 AM